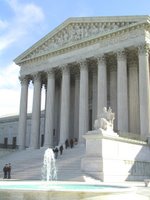 In handling a Bush v. Gore question from the audience at Iona College the other day, Justice Scalia said:

“It’s water over the deck — get over it”

But the suspension of democracy in Florida in 2000 is not something to “get over” any more than other poorly decided Supreme Court decisions such as:

In fact, Bush v. Gore was worse than all three. For each decision above could be overturned by the voters either in Congress or by constitutional amendment. But since Bush v. Gore dealt with the actual disenfranchisement of voters, it could not. All legally cast ballots should have been counted.

Bad judicial decisions are not something to “get over,” but are mistakes to be learned from.