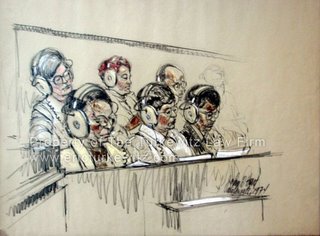 As the Scooter Libby jury deliberates, now with the loss of one very independent minded juror who refused to wear a Valentine’s Day shirt, my thoughts turn to jury nullification and the comments of one New York jurist (and a new blog on the subject):

Many years ago, I tried a difficult medical malpractice case before Justice Stanley Sklar in New York. When Justice Sklar discharged the jury (we settled during deliberations) he told a story that I remember today:

In the 1600s William Penn was arrested for an “illegal” speech. The jury acquitted Penn, which enraged the colonial judge. So the judge imprisoned the jury for a few days to help “persuade” them to reach a verdict more to his liking. The jury refused and their imprisonment was subsequently overturned. Thus, the power of the jury was established, free of the opinions of the judge. (See: Bushel’s Case)

Juries are supposed to be finders of fact, and apply those facts to the law as given by the judge. But sometimes juries don’t like the law and do what they want. While in civil cases a jury verdict can sometimes be reversed, in criminal cases a defense verdict ends the case for all time. A few quotes to ponder:

The jury has the power to bring a verdict in the teeth of both law and fact. — Oliver Wendell Holmes, United States Supreme Court Justice

The jury has a right to judge both the law as well as the facts in controversy. — John Jay, 1st Chief Justice of the Supreme Court

The pages of history shine on instances of the jury’s exercise of its prerogative to disregard instructions of the judge — U.S. vs. Dougherty, 1972

It would be an absurdity for jurors to be required to accept the judge’s view of the law, against their own opinion, judgment, and conscience. — John Adams

For more on jury nullification, I found a brand new blog on juries from trial lawyer and jury consultant Anne Reed and her blog entry: The Rare Ruby-Throated Jury Nullification