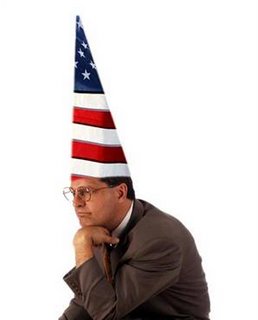 Rule #1 in writing a story about how dumb we are: Don’t make spelling errors. Especially if you are Newsweek. And it is in the first paragraph.

In this week’s copy a story on “Dunce-Cap Nation,” we find the following opening:

July 2-9, 2007 issue – For our What You Need to Know Now cover story, we asked our polling firm to test 1,001 adults on a variety of topics, including politics, foreign affairs, business, technology and popular culture. The results were mixed, to be charitible [sic]. NEWSWEEK’s first What You Need to Know Poll found many gaps in America’s knowledge — including a lingering misperception about an Iraqi connection to the September 11 terror attacks, an inability to name key figures in the American government and general cultural confusion.

(By the way, from the story, only 11% knew who the Chief Justice of the United States was, 41% thought Saddam Hussein was involved with the September 11 attacks, and most people didn’t know that most of the hijackers came from Saudi Arabia.)

And if you find grammatical or spelling mistakes here, rest assured I did it on purpose to see if you are paying attention.
(hat tip to Legal Times)