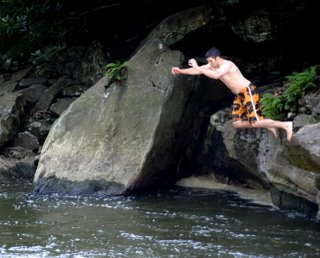 Sometimes the issue of “assumption of risk” is easy. A person voluntarily does something with a bit of danger and gets hurt. The photo at right is an example. The official legalese, however, looks like this:

But a gym class is different than the outside world, according to New York’s Appellate Division, Second Department, where there is a significant disparity between the learned instructors and the neophyte students, as well as the “persuasion” that may be used to “force” a student to complete a task.

In Calouri v. County of Suffolk, a 40 year old woman suffered a broken leg during a team activity in which she had to clear a rope strung between two chairs without touching it. After several failures (she was not only the oldest, but the shortest student in the class) she stepped onto the knee of a teammate as a makeshift step, who wobbled, and she fell.

Under these circumstances, the court refused to have the case dismissed on summary judgment and ordered it to go to the jury.