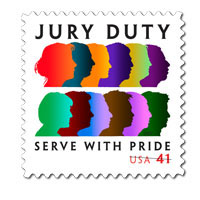 Now it’s been a few years since I’ve used stamps in the office, finally buckling to using the utterly boring Pitney Bowes stamping machine. But mine is a small practice and I get to make the rules, so now the stamps will be coming back for some uses.

I feel pretty strongly about the jury system. After all, other than the draft it is the only time the government asks you to drop what you are doing and check in for mandatory civil service. In New York, everyone is called for jury duty, no exceptions. The idea of empowering a select group of robed politicians to make decisions that affect liberty, or to decide who was right or wrong in a civil dispute, was too much for our nation’s founders. Anyone who read about the crying Anna Nicole Smith judge and the very deliberative Scooter Libby jury can appreciate this concept.

So we have not one, but two parts of the Bill of Rights that guarantee those rights: The Sixth Amendment to protect those charged with crimes and the Seventh Amendment to guarantee juries in civil trials:

In suits at common law, where the value in controversy shall exceed twenty dollars, the right of trial by jury shall be preserved, and no fact tried by a jury, shall be otherwise reexamined in any court of the United States, than according to the rules of the common law.

And this is important because there is no shortage of big business type folks looking for ways to strip that right away, either by forcing arbitration without jurors, or creating some kind of “health courts” or other devices to let the biased decide matters instead of the unbiased.

Of course, there are always some who want to avoid jury duty at all costs. (No doubt they would feel differently if they were the ones in the middle of it all.) But sticking in my brain is a story of one of the greatest juries of all time: The one that tried William Penn in the 1600s, which I recounted back in February while pulling together some quotes on jury nullification.

Perhaps these stamps, if widely used, will be one tiny way to remind recipients of one of the cornerstones of our country’s liberty: Power shall not rest with the few but with the many. And that is what jury duty is all about.

You can buy the stamps here. And attorneys, more so than anyone else, should be using them.