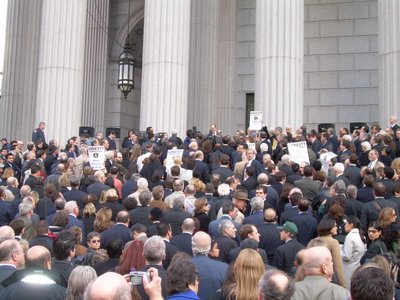 Hundreds of New York attorneys tuned out at 1:00 today to rally in support of Pakistani lawyers that were arrested for demonstrating against the firing of the Pakistani Supreme Court. Some news reports have estimated that 25% of Pakistan’s lawyers are now in prison due to protests against Gen. Pervez Musharraf’s new decrees.

I just returned from the rally, held on the steps of the historic New York County Supreme Court building, moments ago, so this is likely a first report on the web.

By my eye, the crowd looked to be about 300-400 lawyers, well in excess of what I had anticipated. Attorneys filled the steps of the courthouse and spilled out onto the sidewalk below.

The rally had been organized by the New York State, New York County and New York City bar associations, and supported by others.

Speakers included a New York Pakistani lawyer whose father has been imprisoned.

An email was read from students at Pakistan’s Lahore University about this rally, and they were grateful to see that American lawyers had taken notice and were showing support.

(Photo: This photograph that I took may be used without obtaining permission so long as attribution is given. It may not, however, be used for a commercial purpose.)

message for pakistan…
snapshot of a rally organized by the new york state, county and city bar associations yesterday expressing solidarity with the thousands of lawyers in jail or protesting pakistani president gen. pervez musharraf’s decision to suspend …
posted by njcom @ November 14, 2007 4:40 PM
not impressed yet by us lawyers re pakistan
you may recall that the f/k/a gang called last week for the american legal profession to demonstrate its support for the brave pakistani lawyers, who have been standing up in the streets against president pervez musharraf’s suspension …
posted by David Giacalone @ November 14, 2007 10:42 AM
update: new york lawyers rally in nyc
click the photo below to read the breaking recap of today’s rally, provided by eric turkewitz of new york personal injury law blog. (photo courtesy of eric turkewitz). ny-rally-pakistan-716586.jpg.
posted by Kia Franklin @ November 13, 2007 2:21 PM