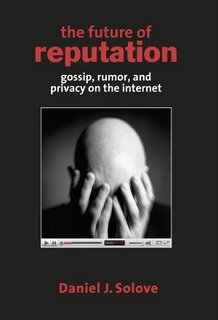 There are portions of Dan Solove’s new book that should be required reading. Not for lawyers, but for high school and college students.

Solove’s book, The Future of Reputation: Gossip, Rumor, and Privacy on the Internet, starts with a good kick-in-the-pants to anyone who ever thought about writing online. But it’s much more than that, for it’s subjects are not just those who choose to expose themselves, but also those who are exposed by others. Gossip and rumor can spread from any corner of public or private life, as Solove demonstrates in a series of horror stories about people whose lives have been completely, and unexpectedly, upended by others writing about them. And it ends most sadly for those whose lives, secrets or peccadilloes have been exposed, as the avenues of legal redress are few and far between.

The two part book breaks down to identifying how reputations and lives can be destroyed in Part 1, and suggests legal solutions in Part 2.

The horror stories of Part 1 are gripping examples of issue identification, from the girl whose dog poops on the subway and the way a story about her rocketed around the Internet, to the lawyer-boyfriend who saw his ex kiss-and-tell on the web, for the whole world to see. Grouped together without the social sciences research that Solove intersperses with it, it would make for a fast and powerful lesson for rookie writers who are thinking of publishing anything on the web.

But it goes well beyond those that are writing, for as Solove discusses the norms of society, one can see how those norms would themselves change as each of us becomes better aware of the destructive power of information unleashed into this medium. If the fear of public shame on the Internet were fully realized, for example, folks may not be quite so careless with words, or with cars, or with relationships. If your anger at a fender-bender could be caught on a cell phone camera, would you vent the way your emotions are asking you to vent?

While Solove looks in Part 2 for the legal solutions and framework for protecting people — such as providing a better means for some people to bring complaints or lawsuits against those that expose private information — part of the solution may itself lie in the change of norms that would come with the full appreciation of the destructive power of the Part 1 stories. This could itself lead people to peacefully reach resolutions and accommodations where an all-out litigation war might have previously been started. An example of this can be found in Carolyn Elefant’s Law.com column: Who Needs a Lawsuit for Excess Fees When You’ve Got the Internet? Though one might just as easily conceptualize how a messy divorce could be played out in full for the world, forever damning people’s names to Googlehell. Since exposure cuts both ways, of course, it may lead people to think twice about what they are doing.

Some of Solove’s ideas on the legal solutions are unworkable though. A prime example comes in the context of allegedly defamatory comments that are left by others. At present, bloggers and website owners have immunity for anything posted by others under section 230 of the Communications Decency Act passed in 1996. (Though if bloggers screen the comments before publishing, it is possible they could be deemed an editor and subject to liability, an issue that Solove misses that I believe is being litigated in a couple of places.)

Solove says this immunity is too strong, and suggests a format where the blogger could contact the owner of the blog or website and ask that the defamatory comment be taken down, and if the request is refused, the site owner could then be sued. Of course, the owner is in no position to have a trial to find out if the allegedly defamatory statements are true or not, and therein lies the problem.

My suggestion for Solove: Keep this book for the lawyers and legal theorists, but create a second version focused on Part 1, targeted toward high school and college students. Let them gain a more full understanding of the power of the medium, and appreciate that those innocent comments they make on Facebook or MySpace about their personal lives could stick around for decades. If they asked themselves a single question — How will this look in 25 years? — it may save an awful lot of reputational harm in the future.

On a final note, I found the book particularly interesting since I started thinking about these issues prior to the passage of the CDA protections when I was doing a little work for The Motley Fool, an online financial forum. There was no law and no precedent for the multitude of issues that would crop up in areas such as copyright infringement, defamation and jurisdiction. It was a spectacular exercise in issue identification.

With Solove’s book, I see the results of some of those issues I first dealt with over 10 years ago. But the reach of a financial forum dwarfs that of a blog. And that made it a welcome read.

responses to blog reviews of the future of reputation: part iii
in this post, i’ll be responding to a few more reviews of the future of reputation: gossip, rumor, and privacy on the internet. this is the third installment (for more responses to reviews, see part i and part ii). …
posted by Daniel Solove @ December 14, 2007 3:00 PM
daniel solove’s the future of reputation
daniel solove’s solution to the potential problem of damning information on the internet is to open up the libel laws and to remove the communications decency act safe-harbor for site owners. as amber taylor points out in a provocative …
posted by @ December 07, 2007 6:28 AM