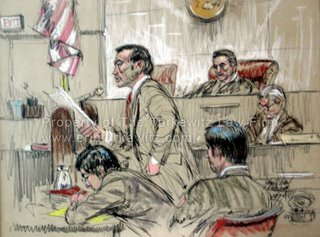 Some folks think that if they can practice law in one area it will easily translate to another. Don’t count on it.

Over at Simple Justice, Scott Greenfield discusses the bone-headed attempt of a Las Vegas personal injury attorney trying to represent a defendant in a murder trial. The problem? This guy apparently likes to brag about how he settles cases (a bad move in itself for what it telegraphs to the insurance company) and figured he could just do the same with his criminal defendant. Scott gives you the dirt on the screw-up, and I’ll now do the reverse for a criminal defense lawyer trying to handle a huge medical malpractice case from personal experience.

I got the call on this case about a month or two before trial, which is to say, the case had been ongoing for several years. The basics were this: A woman suffered a ruptured aneurysm in the brain, and while being prepared for an angiogram, flopped off the table on to her head. She had swelling in the brain and needed two surgeries to remove parts of the brain and lower the pressure. She was the functional equivalent of a 5-7 year old and bed-bound with spastic quadriparesis. Her life was, in a word, awful. And so was her attorney.

The family’s attorney, a very high profile criminal defense guy here in New York (now deceased), had sued the wrong doctors, failed to take the proper depositions, failed to get experts, failed to videotape the woman so the jury could see her, and was otherwise grossly incompetent.

Thankfully, many of the screw-ups were salvageable, as is often the case when the statute of limitations hasn’t been blown. Since the hospital had been sued, and the people involved were all employees, we could go forward, albeit half-blind.

I immediately told him, after getting a 60 second description of the case, that when all was said and done the only difficult issue was proximate cause: Was the fall a substantial cause of any of her brain damage? She did, after all, have a ruptured aneurysm in the brain before the fall.

I agreed to try the case with him, the only time in my life I’ve ever shared my space inside the courtroom well. The idea was that he would do the opening and non-medical witnesses, and I would handle the neurologists, neurosurgeons, neuroradiologists and other medical witnesses, and do the summation.

I still remember the day I walked into court to cross the first doctor, a neuroradiologist, with two groaning litigation bags hanging from my ever-lengthening arms because the little handcart I had was busted. Transcripts and medical records were fully indexed and I had an outline committed not just to paper but to my brain so that I could question without reference to any paper. My teammate walked in without a brief case or even a pad of paper, looked at me and casually asked, “You want me to do this witness?”

Now here is why it’s a mistake for a criminal defense lawyer to jump into a big time medical malpractice case. The orientation of the defense lawyer is that if they can create reasonable doubt with just one juror, their client will persevere. With no burden of proof, a little schtick here and there might well connect with someone. When you have the burden of proof, on the other hand, the opposite is true. You can’t afford anything that even looks like schtick.

And therein lies the problem: The defense lawyer might succeed if s/he throws everything against the wall, knowing that if just one thing sticks it may lead to victory. Now I’m not saying that is the right way to try any criminal defense, because that can backfire big time as Scott points out in the Coffee Mug Defense.

But a word to the wise for those that venture outside their comfort zone. Get help from someone who knows. Ask lots of questions. Start small. Don’t be afraid to say that you are outside your comfort zone, either to the client or the judge. They will understand, so long as you don’t wait on the issue until trial. Because if you wait for trial, there is a good chance your client will get screwed.

A final thought: It is not just the client that gets screwed. If the blown case gets picked up by the press/bloggers, as has been done in the Vegas case Scott wrote about, then one’s own reputation on the Internet may be shot for many years to come, an issue discussed in Dan Solove‘s book on the Future of Reputation on the Internet.