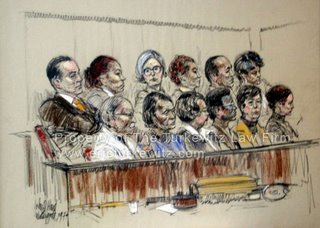 Over at the Drug and Device Blog, Beck/Herrmann have a theory that they want tested with a scientific study:

It strikes us that the plaintiffs in pharmaceutical product liability cases are always striking the educated jurors.

They go on to state that if a health care professional, who they’d love to keep on the jury, survived the preliminary screening, then the plaintiff inevitably strikes that person. Their sense is that “plaintiffs typically prefer less-educated juries, and, in particular, routinely strike health care professionals from serving on juries in pharmaceutical and medical device product liability cases.”

While most of my experience is in the medical malpractice field, that is close enough for me to answer, and it comes from someone who has picked a few dozen medical malpractice juries in addition to picking juries and trying cases in many other personal injury matters.

So here is my take on jury selection, New York style. While the rules change from county to county, one of the “popular” methods is called the “struck method” used in New York County in which 30 jurors are questioned for an hour. Yes, a whole hour for 30 people. That gives you all of two minutes per person, inclusive of your canned spiel. The other side goes, then you step out of the room to strike people from the entire panel. Each side gets just three peremptory challenges, where no cause needs to be identified. The first six left after all challenges (for cause or not) become jurors, and the next two to four are alternates.

As you can clearly see, this is not exactly an atmosphere conducive to delving deep into backgrounds. When I get a doctor, nurse or other medical practitioner, I approach it like this:

While they answer you watch the body language to see if they are comfortable or not with the issue. Some are, some aren’t. (I asked the same question, by the way, to Dr. Rob “Flea” Lindeman in a recent interview.) Many medical workers see bad things at work and know that all is not peachy with their profession. Simply being in the profession doesn’t disqualify them.

If you have one that looks uncomfortable, you then compare that person to the blue collar guy sitting there with his arms folded across his chest scowling at you and the very idea of your complaining client, but claiming he can be fair. I’ll take the waffling doctor over the scowling steelworker every day of the week.

Jury selection isn’t really about selecting individuals you like, but trying to find the few people in the room trying to subvert the process due to their prejudices without telling you, and getting rid of them. Anne Reed and Scott Greenfield both addressed this issue recently in discussing the limitations of the science (or voodoo) of jury selection.

Beck/Herrmann over at Drug and Device seek out empirical evidence to support their thesis that plaintiffs simply bounce doctors or the educated without delving further, but it escapes me as to how such a test could even be created, because jurors are necessarily measured only against the person next to them. That guy with the scowl doesn’t appear in empirical data in any manner, shape or form.

My gold standard is The Turkewitz Beer Test: Whether I would be comfortable sitting down and having a beer with the person and talking. If the answer is no, I try to get rid of them. Human beings are far too complex to pigeonhole based solely on occupation or eduction.

See also from this blog: