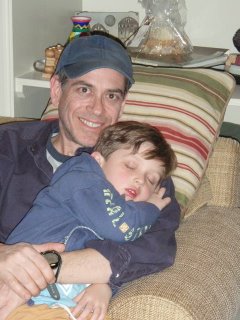 Point 1: The Powers That Be continue to start games so late the little people miss out. That goes for the World Series too. I remember watching the stuff as a kid, but mine won’t have those memories. I find it hard to believe they won’t get the same advertising dollars by starting the game two hours earlier. The whole thing is penny-wise and pound-foolish when it comes to developing the next generation of fans.

Point 2: The Manning-Tyree Scramble and Catch will live on forever the same way that Mookie Wilson’s at bat in Game 6 of the 1986 World Series lives on.

Point 3: Don’t jinx yourself. The Patriots greedily tried to trademark 19-0. Which caused the NY Post to file a trademark for 18-1. 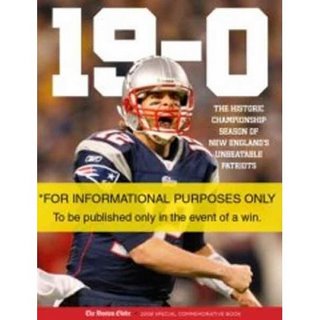 Of course that was not the only thing premature, as attested to by this new book by The Boston Globe:
19-0: The Historic Championship Season of New England’s Unbeatable Patriots.
[Update: The link went dead after I grabbed this image]

Think the Pats will file a trademark suit against the Globe?

And if you feel you need to see The Play replayed, in case you too fell asleep because the NFL started the game so late as they bow to the Temple of the Almighty Dollar, here is the small snippet. Thanks to short-sighted NFL greed, children in the eastern part of the country never saw it live [Update: It looks like the NFL wasn’t too pleased with seeing the clip on YouTube and had it taken down. I guess that’s one way to make sure the little ones never see it. Way to go NFL!]

Point Last: Dan Hull at What About Clients has his Super Bowl themed Blawg Review #145 up and running, for more legal looking stuff. And it’s anything but a snoozer.