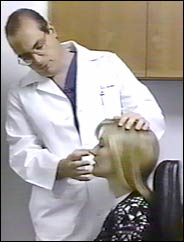 New York plastic surgeon Michael Evan Sachs has finally surrendered his license. As of 2005 he had settled an astonishing 33 malpractice suits, according to this New York Times story.

One of those suits concerned the highly publicized death of Kathleen Kelly Cregan who had flown to New York from Ireland for a face lift.

In a long 2005 investigative piece in the New York Times, it noted that he had settled 11 cases in 1999 alone, and that the Daily News had stated back in 2000 that he was on a list of the “most sued doctors in New York.” (Sachs is seen here in an image from his promotional video.)

According to the article he specialized in rhinoplasties (nose jobs) and sometimes did as many as 10 in one day according to a former employee. “Appearing in 2003 on a broadcast of ‘Ireland AM,’ the country’s most popular morning television show, he stated he had done 42,000 rhinoplasties,” which would have been an average of four every day since he graduated medical school. He once did a free face lift in exchange for publicity in an Irish newspaper.

And it was that article that brought Kathleen Kelly Cregan to New York where she died.

Commenting about his web site, Dr. Scott L. Spear, the president of the American Society of Plastic Surgeons when the 2005 New York Times article appeared, said of Dr. Sachs’s curriculum vitae and biography: “This thing is full of puffery, self-aggrandizement and not professional. This is not a surgeon of high professional standing.”

Simply being sued, of course, doesn’t mean one did anything wrong. There are, after all, some bad lawsuits. But you would think that after the first dozen the Health Department would catch on that there might be a problem, investigate quickly, and not let things get out of hand. A list of 27 settlements from the past 10 years can be found in this document: MichaelSachsSettlements.pdf

It was just last week that I discussed the idea that the tort “reform” of capping malpractice judgments for the most badly injured was a horrible idea. And that if we wanted to do anything about reducing malpractice payments we should take note of the fact that one study showed that 7% of doctors were responsible for 68% of the payouts. (And in the comments of that post, another study, apparently using different years, found 5.9% of doctors responsible for 57.8% of the payouts. The study also found that 82% of doctors had never had a payout.)

So along comes Dr. Michael Evan Sachs to help prove the point. If medical malpractice insurance premiums are a problem, perhaps the medical groups should think less about maintaining a White Coat of Silence, and do more to exorcise the bad doctors from their ranks.

The Cregan case is still pending, and is being defended by Mark Aaronson, one of New York’s top medical malpractice defense attorneys.