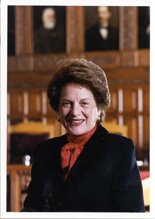 Yesterday Chief Judge Judith Kaye brought a lawsuit for long sought judicial pay raises on behalf of the New York judiciary. In doing so, some ethical issues now present themselves based on the free legal services offered to the judiciary by Wachtell Lipton, an issue quite apart from the more obvious question of how any judge that is part of the plaintiff’s class can actually hear the case. (Those issues are covered today at Judicial Reports.)

Now here are the other ethical questions:

1. Wachtell Lipton is representing the Chief Judge pro bono through Bernard Nussbaum, former chief counsel to Bill Clinton. But isn’t that type of free representation a gift, and a very substantial gift at that, in violation of the ethical rules? According to New York’s Disciplinary Rule 7-110:

So what does the Code of Judicial Conduct say? Here it is:

(5) A judge shall not accept, and shall urge members of the judge’s family residing in the judge’s household not to accept, a gift, bequest, favor or loan from anyone except:

(a) a gift incident to a public testimonial, books, tapes and other resource materials supplied by publishers on a complimentary basis for official use, or an invitation to the judge and the judge’s spouse or guest to attend a bar-related function or an activity devoted to the improvement of the law, the legal system or the administration of justice;

(d) a gift from a relative or friend, for a special occasion such as a wedding, anniversary or birthday, if the gift is fairly commensurate with the occasion and the relationship;

(e) a gift, bequest, favor or loan from a relative or close personal friend whose appearance or interest in a case would in any event require disqualification under section 100.3(E);

(f) a loan from a lending institution in its regular course of business on the same terms generally available to persons who are not judges;

2. Next question: Did Judge Kaye commit an ethical violation by accepting such a gift from Wachtell Lipton on behalf of the judiciary?

3. And now on to Wachtell’s own problem: Will those who are litigating against Wachtell in New York’s state courts now move to have the firm disqualified because of their gift? At the very least, a horrible perception will arise when any Wachtell lawyer steps into the courtroom in any case to appear in front of his own client, with its apparent conflict of interests. I have to assume that anyone litigating against Wachtell will now look into making motions to disqualify the firm.

Now this is not an argument against judicial pay raises. Far from it. I think our judges are badly underpaid and have deserved he increase for many years. No, this goes only to the manner in which they are going about it by accepting a major gift from a law firm that litigates in front of these same judges, who are now their clients.

Even if the legal services fall into some legal loophole, and I haven’t seen it yet, it still seems to smell. Especially if I were a litigant where Wachtell was on the other side.

And one other, unrelated, issue. Among the defendants is the State of New York. But the State can only be sued in the Court of Claims, not the Supreme Court. Why did Wachtell, with the approval of the state’s top judge, bring the action in a court where it is not permitted to do so? (Explanation here: Doh!)