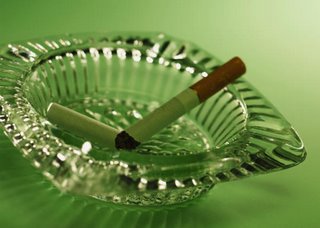 Raymond Marquez smoked for 30 years and then quit. Then, after being locked up at Rikers Island for 29 months awaiting trial, he got bladder cancer. He blamed the City of New York for the cancer, since the city’s Department of Corrections runs the jail and permitted indoor smoking while he was there. Smoking is the leading cause of bladder cancer.

According to Marquez, smoking indoors was permitted between 1998-2001 when he was awaiting trial, and that the secondhand smoke traveled through the ventilation system. The policy changed in 2003 to ban indoor smoking.

While Marquez said he had smoked from age 15 to 45, he also said that he had stopped for 23 years. He also claimed, incredibly, that he never inhaled. The medical underpinning of the suit was his claim that after 20 years of smoking cessation the risk of bladder cancer is as low as that of a non-smoker. The 78 year old plaintiff said, therefore, that the cancer must have come from the jail house smoke.

A New York jury that returned a verdict Friday didn’t think much of the claim from the plaintiff, who used to be “the foremost kingpin of the city’s illegal numbers rackets” and was known as Spanish Raymond. He had previously pleaded guilty to gambling charges, but was acquitted of the new charges. (The acquittal was not before the jury.) And after a two-week trial on the smoking case, and just over an hour of deliberation, the jury tossed it.

When I first heard about the litigation, it sounded like a dog, and I don’t know any reputable personal injury firm that would have taken it. And as it turns out, the suit was brought by the plaintiff’s son, who happens to be a local attorney. (I once went down that road myself, representing my father, with thankfully much different results.)

It seems now that the city wants to use this suit for its propaganda benefits, claiming in a press release (below) that this is an example of “ridiculous lawsuits.” Using anecdotes is a fairly typical method of trying to win tort “reform” arguments, but it is also pretty useless in this setting. Pulling out the bad cases for display to the public tells you nothing about the good ones that the city remains mum on.

(Full Disclosure: Defense counsel Scot Gleason is a good friend of mine who has also worked for me in the past on an “of counsel” basis.)