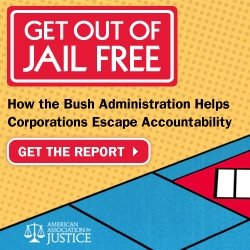 If you thought a lame duck presidency couldn’t do too much damage to the civil justice system you would be wrong.

The American Association for Justice today released a report showing a coordinated effort by the Bush administration to make corporations immune from lawsuits through the concept of preemption. With preemption, a federal law that grants immunity will supercede a state law that allows lawsuits. But since President Bush couldn’t get Congress to agree to anti-consumer laws that grant immunity to corporations, the report demonstrates a pattern of obtaining that immunity by executive fiat. This was done by placing the corporate immunity clauses in the preambles of agency rules. The Supreme Court wil shortly hear these arguments in the context of a drug case and FDA preamble that attempts to grant immunity, when Wyeth v. Levine is argued.

The AAJ found that, since 2005, seven federal agencies have issued over 60 proposed or final rules with preemption language in the preamble. Preemption is essentially a covert form of tort “reform” that is unseen by the vast majority of the public.

While I don’t generally publish press releases, as I don’t want to be seen as anyone’s mouthpiece, a report detailing a pattern of corporate immunity and protection grants, even when those companies might be clearly negligent, is important enough to make publication in full. (Full disclosure, I am a longtime member of AAJ.)

In reading the release and report, bear in mind that the Bush administration, and conservatives in general, like to talk about keeping government small and keeping power at the state level. This end-around of Congress by using agencies to pass regulations that our legislators refuse to endorse, by contrast, is a naked power grab by the President, demonstrating a stark departure from conservative philosophy.

Note also the issue of personal responsibility. It’s part of that whole take-care-of yourself and pull-yourself-up-by-your bootstraps theme that conservatives like to speak about.

Except when it comes to big business. When they do something wrong, the Bush administration screams that they should be immune. Let the victims be victimized twice is the general idea, so long as corporate profits aren’t hurt. The hypocrisy is once again self-evident.

Washington — In a stealth effort coordinated at the highest levels of the Bush administration, multiple federal agencies were repeatedly ordered to usurp state law and undermine consumer protections, according to documents obtained through repeated FOIA requests by the American Association for Justice (AAJ). The documents released today detail how helping corporations escape accountability for dangerous products has been the administration’s top priority.

“This is the real Bush legacy,” said AAJ President Les Weisbrod. “In effect the Bush administration made the safety of Americans secondary to corporate profits.”

The FOIA documents detail a Bush regulatory strategy called preemption. In short, the Bush administration has decided that federal rules should usurp — or preempt — the rights of states to protect their citizens with stricter safety standards. In turn, consumers can no longer use the state protections when harmed by negligence or misconduct, giving total immunity to corporations instead.

AAJ has tracked how the administration’s first attempts to preempt states rights utilized friend-of-the-court briefs on behalf of corporations in civil justice cases. After only mixed success, the administration then shifted strategies, targeting instead regulatory agencies in charge of product safety oversight. Beginning in 2005, carbon copy statements claiming that federal agency rules preempt state law began surfacing in the “preambles” of regulation issued by the federal government, and in some cases in the body of the final rules themselves. Because the courts have not yet conclusively determined whether preambles carry the full weight of law, corporations have a new legal theory on which they can argue in product liability cases.

“Unelected federal regulators are now claiming that states can’t protect their own citizens with stronger consumer protections,” Weisbrod added. In an upcoming Supreme Court case, 47 state attorneys general filed a brief arguing the FDA is breaking with historical precedent. In fact, in their brief they urge the U.S. Supreme Court to uphold a Vermont Supreme Court ruling that state law forces a drug manufacturer to pay $6.8 million to a Diana Levine, whose arm had to be amputated after she was injected with an improperly-labeled Wyeth drug.

Since 2005, seven federal agencies have issued over 60 proposed or final rules with preemption language in the preamble. During the past year, AAJ submitted numerous FOIA requests that prove the Office of Management and Budget (OMB) had direct involvement in the placement of the “complete immunity” preemption language. In an earlier request, OMB responded that there were no documents. However, emails recently obtained from the individual agencies prove that OMB did indeed discuss preemption with agencies, and in some instances OMB officials wrote the language.

Given this discrepancy, AAJ submitted an expanded request for OMB documents. On September 26, 2008, OMB responded it had identified 146 documents, but refused to release any of them, saying that “the disclosure of these documents would not be in the public interest.”

In piecing together the emails from the FOIAs, AAJ uncovered the cozy relationship between federal officials and the industries they regulate. For example, the pharmaceutical industry intensified its efforts to influence the FDA in the months leading up to the physician labeling rule’s release on January 24, 2006. Much of the lobbying efforts were aimed at Sheldon Bradshaw, who had succeeded Daniel Troy as FDA chief counsel in April 2005.

Less than six months after this meeting, the agency would release its final physician labeling rule with complete immunity preemption language in the preamble, a complete about-face from the language in the proposed rule that specifically said the agency did not intend to preempt state law with the rule.

“Big business lobbyists have been on a crusade to destroy state consumer protection laws, and further stack the deck against American consumers,” said Weisbrod.