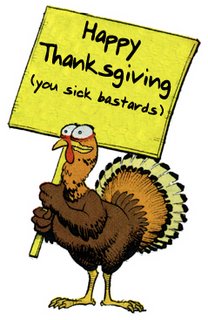 Turkey time is always an interesting time around the Turkewitz household. Always has been and always will be given the easy play on the name.

But that won’t stop us from throwing the football around tomorrow in our annual game, called…wait for it…The Turkey Bowl.

It’s also a good time to remember that Ben Franklin wanted the wild turkey as the national bird, due to its courage. I suspect my childhood would have been a bit different this time of year if he had prevailed. He wrote in a letter to his daughter, comparing the turkey with the bald eagle:

For the Truth the Turkey is in Comparison a much more respectable Bird, and withal a true original Native of America . . . He is besides, though a little vain & silly, a Bird of Courage, and would not hesitate to attack a Grenadier of the British Guards who should presume to invade his Farm Yard with a red Coat on.

But instead, we gobble them up this time of year, which might be good for us but not so good for the actual turkeys.

May the day be a happy and peaceful one for all. It’s a good time to remember those who have less, and if you are reading this then you have a computer and that means there are billions of people who have less.