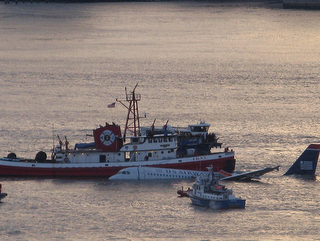 The plane crash in the Hudson River today may test New York’s new attorney ethics rules with respect to solicitation.

New rules were put into effect in the wake of the 2003 Staten Island Ferry disaster that killed 11 and injured 71. The Appellate Divisions were appalled that so many personal injury lawyers ran to place ads in the Staten Island Advance before a 3 pm deadline on the day of the accident; ads that were placed while rescue efforts were still underway.

Specifically, there is a prohibition on solicitation within 30 days of such a mass disaster. (While some of the new rules were found unconstitutional, this one was not.) The new rules read:

Lawyers who place the ads claim that they do so so that people will be able to quickly learn their rights before an insurance company stuffs a release under their noses while they are still in shock from the incident, and gives them 10 cents on the dollar. The new rules, it should be noted, prohibit the insurance companies from doing so. The following paragraph reads:

(b) This provision limiting contact with an injured individual or the legal representative theoreof applies as well to lawyers or law firms or any associate, agent, employee or other representative of a lawyer or law firm who represent actual or potential defendants or entities that may defend and/or indemnify said defendants.

Of course, the authority of the court to regulate the insurance companies in such a manner has never been tested. (See: Did New York Courts Exceed their Authority With New Advertising Rules?)

Some may believe that, thanks to the fast and heroic action of local ferry operators that saved so many people, and the lack of serious injuries at this point (as per news reports), it would indicate that few personal injury lawsuits would even occur. But even if the physical injuries are minor, there will no doubt be substantial psychological damage to many who thought they would not live to see another day, and may suffer post-traumatic stress disorder in the months and years to come.

With all this in mind, I Googled “Hudson River Plane Crash” to see who started to run ads. Thankfully, the answer is zero. None. Nada. Zip. I don’t know if this is the result of the new ethics rules, or due to the lack of death or serious physical injuries, but it is certainly surprising. A pleasant surprise I might add.

So far, so good. Let’s hope I don’t have to do an addendum.

[1st Addendum: OK, I now have to do an addition. Yeah, you knew there would be one, right? An attorney search service is might, in fact, trolling for victims (via Overlawyered and Popehat). This is would be a clear violation of New York’s attorney ethics rules, but of course, the site claims not to be a law firm (and this might be for a different crash). I had warned in November 2007 of exactly this type of problem, with lawyers using agents to advertise while turning a blind eye to the ethics of the services. See: The Ethics of Attorney Search Services. I wrote at that time:

The implications of attorneys outsourcing advertising to a third party that may be acting unethically represents an area of law that is unexplored by many ethics committees. The company itself is most likely not in your state and not subject to attorney disciplinary rules. So what forces the advertising company that the lawyer is using to act in accordance with local ethics codes?

The very act of engaging such an advertising service should subject the law firm to disciplinary action for any ethical violations committed by the non-attorney advertising company. With this threat hanging over the head of an attorney, it is unlikely they would take such risks with their licenses. It thus makes it impossible to turn a blind eye to any ethical breaches by any service that is used as a front for the law firms.

There is little doubt that if and when attorneys are called on the carpet for problems, they will simply play dumb and say they didn’t know. But that should not be an acceptable excuse. And this is a problem that should be nipped in the bud quickly.] End 1st Addendum

[2nd Addendum: OK, it seems that we have a clear winner on the issue of this crash and the new ethics rules, with one New York firm clearly and unequivocally using “Flight 1549” and “US Airways” in their Google ad]

…it’ll take more than a miracle to keep the lawsuits from flying. As far as we know, no suits have yet been filed. But we were curious about what such a claim — negligent infliction of emotional distress, anyone? — may look like, and whether it could succeed.

Please don’t rush to New York and file a lawsuit over yesterday’s crash.