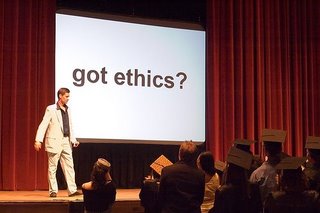 The ads are gone. All of them. In the wake of the crash of Continental 3407 near Buffalo I tracked seven different law firms using Google Adwords to advertise for victims, and every ad has now disappeared. (Search terms used: “Continental 3407” and “Buffalo Plane Crash.”)

(Update at 5:18 pm on 2/26, a search for “Continental 3407” once again brings up an ad by the Washington DC firm of Clapp, Desjardins & Ely. I wrote about them last week in DC Firm Jumps Into Cyber-Solicitation Fray, Chasing Buffalo Air Crash Clients.)

So here is a quick and dirty analysis as to whether or not attorney anti-solicitation rules were the reason, based on three recent disasters.

First: On October 15, 2003 the Staten Island Ferry crashed killing 11 people and injuring 71. In the following days the Staten Island Advance was flooded with lawyer ads. This was the impetus for New York’s 30-day anti-solicitation rule, which went into effect at the beginning of 2007. (I tried to get back issues to actually count the ads, but they were not available.)

Second: On September 28, 2008, a Metrolink train crashed in Chatsworth, CA, near Los Angeles, that killed 25 and injured over 100 more. Kevin O’Keefe counted at least 25 sponsored ads by attorneys when he ran a Google search for “Los Angeles Train Accident Attorney.” California does not have an attorney anti-solicitation rule.

Third: The crash near Buffalo had only seven ads, and most (as detailed in the links below) were from out of state.

While this isn’t the most scientific of experiments, the sharp contrast leaves little doubt that ethics rules are effective in putting a sharp brake on attorney solicitation (or at least this public type of solicitation). Bearing in mind that there are about a million lawyers in the nation and about 75,000 in New York, the restraint shown has been extraordinary. Only a very few people attempted it, and they quickly withdrew.

Whether the rules survive First Amendment challenge due to the difficulty defining solicitation given the myriad ways it can be done under cover of writing about an incident on a website or blog, as I’ve previously discussed, is another story.

These rules exist in eight states (as of July, 2007) plus a federal rule specific to aviation disasters. The only judge to review the rules so far, Judge Frederick Scullin, Jr. sitting in the Northern District of New York in Alexander v. Cahill, wrote in a footnote about the reason for the rules:

Without question there has been a proliferation of tasteless, and at times obnoxious, methods of attorney advertising in recent years. New technology and an increase in the types of media available for advertising have exacerbated this problem and made it more ubiquitous. As a result, among other things, the public perception of the legal profession has been greatly diminished.

That decision has been appealed and was recently argued in the Second Circuit.

Prior posts on this subject:

march 5 roundup
uninjured patients of california, unite to demand the money you have coming to you! [russell jackson via pol]; lawyer’s nastygram to blogger patterico: how dare you talk to my witnesses as part of your research on my case? …
posted by Walter Olson @ March 05, 2009 9:35 AM