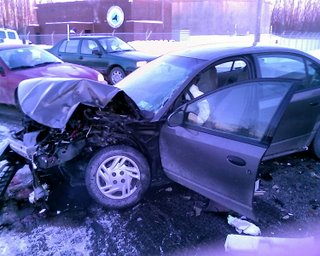 New York’s No-Fault law is out of control. It seems to have reached the point where judges are almost demanding one of two things from injured patients: That their doctors get legal tutoring on how to write reports that will satisfy the judiciary, or alternatively, that injured patients seek treatment from only those doctors that already know how to write medical-legal reports.

Let me explain: To bring a lawsuit for injuries after a car accident in New York, you have to have suffered a “serious injury.” And the legislature has defined “serious injury” as:

Under this system, a fractured pinky clearly meets the threshold of serious injury under #4. But debilitating connective tissue injuries — called “soft tissue” injuries by some — to the neck, that can go on for years, may not. So how does the judiciary deal with some of the more subjective categories, such as 7-9 above?

Today, in Cruz v. Aponte, the First Department tossed out the plaintiff’s case on a summary judgment motion because the plaintiff failed to meet threshold, despite the torn meniscus in the knee that would need surgery. But here is the language that screams out at me, for it raises the threshold bar to ridiculous heights in its demands for what patients must do at their moments of maximum stress and what doctors must write to document the limited range of motion of the injured, and note my italics for some of the requirements:

[P]laintiff submitted the affirmation of a physician who, relying on an MRI report prepared shortly after the accident, found multiple meniscal tears of the right knee, for which surgery would be indicated if plaintiff could lose weight, and opined that the tears and limitations were traumatic in origin. The physician also concluded, based on an examination conducted more than three years after the accident, that objective tests demonstrated significantly limited range of motion. However, his examination, unaccompanied by the requisite quantitative assessment of range-of-motion limitations based on objective testing contemporaneous to the time of the accident, was insufficient to raise an issue of fact as to serious injury…Accordingly, plaintiff failed to raise an issue of fact as to whether she suffered the type of injury from the 2004 accident that constituted a permanent consequential limitation of the use of her right knee.

Now let’s break this down: The court demands that the range of motion limitations be contemporaneous to the accident. That means the patients must go to the doctors that are willing to write reports, and write them the way the courts want them to, as opposed to going to doctors that they actually like. Many people, especially the poor, already have a hard time finding a doctor, but now they must be savvy enough to find a court-friendly one.

The physicians will have to write the way the judges like, not the way they learned to write in medical school. You may think they are the same, but they are not. If a patient has a range of motion of 90 degrees for a particular movement, a doctor might note that. But if the docs don’t also write what the normal range of motion is (and there would be no need for them to do this on their own, since they already know what normal is) the court might toss it out. That 90 degrees may speak volumes to the doctor but mean nothing to the court. Of course, if the doctor doesn’t quantify it, and merely says “poor” or “limited” the patient is also out of luck, since it must be “quantified.” And if the doctor merely has chicken scratch writing for his notes, then the victim is really in a pickle.

Never mind that many doctors don’t write like this in their notes, the court wants it anyway. So you might have the best doctor in the world, and you might even have gone to the office “contemporaneous to the time of the accident,” but if the doctor doesn’t write reports in the exacting manner that the courts’ want, well too damned bad. The court will simply take the case away from the jury and dump it.

And of course there is the requirement that the testing be objective, which raises three issues. First that the injury is capable of quantitative testing, second that the doctor did it, and third that s/he recorded it (and did so in the exact manner the courts likes). So it isn’t really about the injury, it’s now all about the doctor and the doctor’s knowledge of the law.

This, of course, is just plain stupid. The courts now demand that the injured be savvy enough to find a doctor willing to write medical-legal reports to the court’s exacting standards, instead of finding the best and most trustworthy physician they can find.

And if the injured patients do find doctors knowledgeable enough in the medical-legal world, and finds them quickly enough for the court, then they will be attacked for using one of the “regular” doctors that practice medico-legal medicine.

The No-Fault law is a horrid mess. In December I noted how Justice Paul Victor in the Bronx was frustrated with the confusing state of the law, and took aim at the legislature, judiciary and the bar for the problems with the No-Fault standards, implicitly calling for reform. And I had noted a year ago how the law actually encourages people to be slackers instead of trying to return to work.

The time for reform is now. The law is godawful and getting worse as often impossible burdens are placed on the injured regarding their choice of a physician. The victims should be worrying about which doctor will give them the best treatment, not who can write the best medico-legal report.

12 thoughts on “New York’s No-Fault Mess (Do Our Judges Want Doctors To Go To Law School?)”