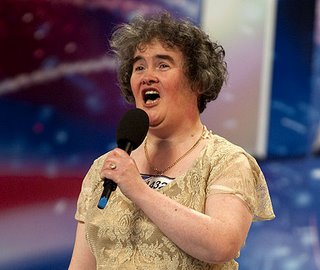 If you haven’t heard of unemployed, 47-year old Susan Boyle taking the stage in a British talent shows and blowing the doors off the joint by now, you’ve probably been living under a rock. The expectations were as low as can be for the rather plain (some say homely) looking woman who, it turns out, had the voice of an angel. (Video here)

And there is the lesson for trial lawyers. One considerable reason for her stunning story was that the expectations were set so low. If she had been a pretty blond taking the stage, it would not have been the same. She would still have a nice voice, but would she have become an international human interest story? Of course not.

And of course that isn’t fair. But people judge others on appearances all the time, and that doesn’t change when we become jurors.

Two years ago I wrote about the problems of well-educated, attractive adversaries in One Way to Cross-Examine The Attractive Doctor, and discussed how to approach the issue before that witness takes the stand in the medical malpractice setting:

The answer is not to knock them down, but to build them up in opening statements and jury selection (if your jurisdiction allows).

Tell the jury they will like the defendant. After all, your client chose this doctor for surgery, right? Trusted him/her. Kinda like Marcus Welby. Therefore, it stands to reason, the jury will too.

This does a few things: First, you have been dead honest. It is unlikely the jury expected you to “confess” this thing, but frankly, they will likely see it anyway if defense counsel is even mildly competent. Trying to tar a physician at the outset that your client previously trusted has enormous potential to backfire.

The jury also now has very high expectations for the doctor. With the bar set so high, any slip-up or contradictory testimony is likely to be viewed in a harsher light. Assuming you have a solid case to take to trial, this doctor-defendant will also lay out the standards of care (while they still trust him/her) before being confronted with the deviations from care, the sloppy notes, the rushed surgery, failure to read the x-ray, or contradictions from deposition testimony.

And the reverse may also be true, as Ms. Boyle demonstrates. Instead of building your own clients up, you can compare them to their adversaries, and warn the jury that the nice doctor on the other side, for instance, might have much higher education and more practice speaking in front of others, and caution jurors not to judge your client on looks or awkwardness. This gently lowers the bar without hurting your clients or unfairly disparaging the other side and, like Ms. Boyle, makes it easier for them to be liked by the jury. (Assuming this scenario is appropriate for the case, of course.)

I’d love to say that trying a case is all about the facts and only the facts. But appearances sadly mar the way for many. And this is one way to level that playing field.

5 thoughts on “Susan Boyle’s Voice, and the Lessons for Trial Attorneys”