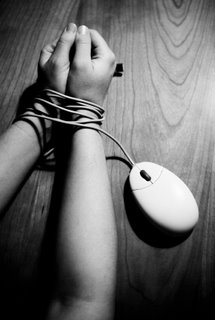 Flashing across my news reader came this from the ABA Journal:

A lawyer for Goldman Sachs has been accused of trying to arrange a sexual tryst with an undercover investigator posing in online chats as a 15-year-old girl.

This, in itself, is not something I would ordinarily cover. He was after all, merely arrested. He has not been convicted of anything.

While the arrested, who is married with three children, certainly has greater issues today than his law license, it is an issue that will come up in a few years if he is convicted.

The question here is: Under New York law, is this a disbarrable offense?

And the answer, apparently, is no. While our appellate courts generally issue unanimous opinions in cases dealing with ethics and lawyer disbarment, last December there was as a sharp divide in an identical case (See: Sex Offender Keeps Law License (Updated)).

The Appellate Division, First Department ruled 3-2 that suspension was in order as opposed to disbarment. You can read the sordid details at the link above.

2 thoughts on “Goldman Sachs Lawyer Arrested In Underage Sex Sting (Is it a disbarrable offense?)”