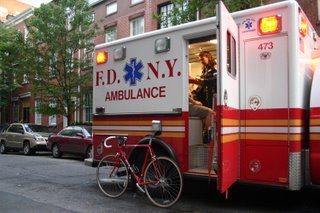 Today’s post is inspired by a trifecta of recent stories on people chasing victims for profit. This includes:

2. A Florida hospital employee selling patient medical records to a middle man who turns them over to a personal injury attorney; and

Now every business and every profession has its scoundrels. Regardless of whether the lure is one of the big three of money, sex or drugs, it happens to doctors, lawyers, clergy, schoolteachers and every other group you can imagine. Every race, religion and group of any kind will have its problem participants.

But unlike the police and their Blue Code of Silence or the doctors and their White Coat of Silence, or the priests and their Collar of Silence, I don’t ever want to see such silence by lawyers.

The message should be loud and clear: If you employ runners to chase cases at the local hospitals you shouldn’t be practicing law. And it should be equally clear that the vast, vast majority of attorneys look down with utter disdain on such conduct. Without question, most of the lawyers that I run into, on both the plaintiffs and defense side, practice law conscientiously and ethically. The corrupt ones should not expect others to come to their defense.

When lawyers practice unethically it tarnishes the entire profession and makes it more difficult to represent those in need of legal services.

When I wrote my first piece on this two years ago, I wrote the following words, which I reaffirm today:

…I know this crap happens and I want it stopped. I have heard it through the grapevine as new clients reported on how they were approached by others after being hospitalized. It is utterly infuriating, and I am pleased that the Manhattan District Attorney is working on the issue. I have often quietly hoped (and today, not so quietly) that District Attorneys in the Bronx, Brooklyn, Queens and Staten Island would follow suit, not only investigating based on tips they receive, but even running sting operations.

2 thoughts on “Ambulance Chasers, Runners and Other Creeps”