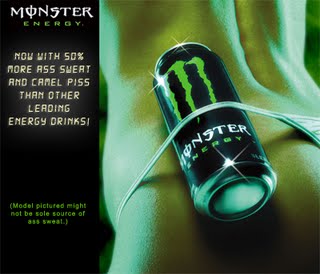 Monster Energy Drink’s lawyers seem intent on living up to their product’s monster name. Since I consider frivolous legal conduct to be within my wheelhouse, and this evening being Halloween eve, I thought I would look at the monstery conduct of Hansen Natural, the billion dollar company that makes this brew.

Could this company really have issues in this scary season, or am I just trying to piggy-back a play on names today? You be the judge:

In one act of brilliance, the legal wizards thought it would be a fine idea to send a take down notice to a beverage reviewing website. The site is actually called BevReview.com, making it pretty clear at the outset what their focus is. They reviewed the product. And they trashed it:

The color of the drink was dark yellowish… I guess you could call it amber, but who really knows. Think apple juice with a somewhat red tint. As for the taste, well… it was odd. Think citrus + medicine. Yum! There wasn’t a lot of carbonation (which reminded me somewhat of how Vault is being positioned as a hybrid soda/energy drink). The aftertaste was somewhat bitter, rather acidic. Not really pleasant, to tell you the truth. I actually couldn’t quite place what the heck the flavor actually was. It starts out smooth, and then the aftertaste kicks in and ruins it. (Of course, this might also have to do with the fact that sucralose is listed as an ingredient.)

Overall, the taste was weird and I don’t think I’d want to drink this again.

No problem, right? Except that their chief legal eagle, Darlene R. Seymour tried to scare the crap out of this little web site by threatening them with a lawyer letter. Perhaps she missed the class on that First Amendment thingie. The web site posted the letter, apparently telling Hansen to take the proverbial long walk on the short pier.

And in another attempt at making its name synonymous with evil, the billion dollar company sent a cease and desist letter to the tiny Vermont Rock Art Brewery for trademark infringement for making Vermonster Beer. Hansen thought there might be some confusion in the marketplace, despite the fact that they don’t even make beer.

But that didn’t work out so well either, as the brewer fought back with a viral marketing campaign including a YouTube video hit. The owner went with the Web Defense under the assumption that the legal defense, while clearly winnable, would bankrupt his tiny brewery. So instead of waiting for the economic end game to hit him, he went after the giant.

In one of the great David v. Goliath battles of the web, which ended with a fast win for the brewery, the brewer turned the tables on the mega-monster when Hansen distributors started to boycott Monster Energy. Instead of punishing the brewer with legal fees, Hansen was now being punished with its products being pulled from shelves.

And others chirped in that, by the way, their stuff tastes like camel piss. Welcome to the web, Hansen.

So instead of pounding the brewer into salt, it was Hansen that got pounded. Just check some of these links out:

And in a note to the shining legal talents that represent Hansen, you should note that my mockery of your product in the image shown here also falls within the ambit of First Amendment protection. (Both ass sweat and camel piss are, as far as I know, natural products, which you seem to tout in your drinks, so I figured you’d appreciate that. You might also like the trailer for Booty Sweat Energy Drink, but that would require an actual sense of humor.)

Perhaps you think my comments may lead to some confusion in the marketplace as to your actual ingredients. But that’s unlikely, since I don’t presume that readers of this blog are total morons.

I know that I shouldn’t have to explain that to you, and that is should be readily apparent to all lawyers (and in fact, everyone that made it out of high school), but you guys do seem to need a bit of help in that department.