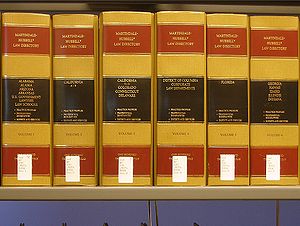 Once upon a time Martindale-Hubbell was a leader in the legal field. They had big impressive looking books with the names of lots of lawyers in them that BigLaw firms paid lots of money for so that they could put them on their shelves. They gave fancy ratings to lawyers that people in corporate law departments actually thought was important.

Wikipedia’s entry on M-H, which I suspect M-H checks religiously to guard against defacing, starts this way:

Martindale-Hubbell is a venerable brand in the legal community, known for being the defacto source for finding and connecting lawyers with other lawyers around the world since 1868.

And several days ago, this “venerable brand in the legal community” apparently left comment spam on one of my posts. Oh, how the mighty have fallen.

The comment, at first blush, didn’t look like spam. It didn’t have a dozen links in it and talk about gold or cheap drugs you can buy on the web. The writer actually strung words together into sentences.

The sentences, however, had nothing to do with the post. Nothing. Nada. Zip. And it was on a post that was two years old. And the exact same sentences appear elsewhere in comments on other blogs and link back to the same M-H site.

The writer left the message on a popular post of mine from October 9,2007, entitled Don’t Post This Letter On The Internet! That post was a classic that had the Dozier Law Firm trying to copyright its cease and desist letter to prevent it from appearing on the web. Dozier threatened to sue anyone that posted it. Public Citizen called his bluff, posted it, invited Dozier to sue them, and Dozier, to the extent I could tell, ran away from the challenge with his tail between his legs. There’s a gazillion posts on the subject.

So what did M-H write last week in response to that old subject? Here it is in its entirety:

Being a representative of a law firm, reading an article and blogging and commenting on legal issues has always proved to be useful. To some extent, information given on such blogs and the comments and articles has benefited the victims facing complexities in term of legal issues and helps us also update our knowledge of what is happening around and what all complexities we should expect from our future cases.. It provides a great platform to discuss experiences and share knowledge.

In other words, M-H posted gibberish that was discernible as gibberish if you read the actual post or cared about the posting of nastygrams.

How do I know it was M-H that dropped the comment spam in my post? Because they added a link that brings you to the M-H “International Directory” at this url: http://www.martindale-hubbell.co.uk/. This is one of the many Find-A-Lawyer sites on the web.

Could this have been someone impersonating M-H? Potentially. I did, after all, write about a local defense lawyer that sued someone just last week for impersonating him and writing outrageous things. And one commenter did warn me of the potential for impersonation by rivals when I announced my policy of outing comment spammers.

But if this was a rival of M-H impersonating it, hoping I would write a post flaming the hell out of M-H, s/he would expect M-H to subpoena Google to get the information on their identity. In other words, that individual would have to have rocks in his or her head. And as between an impersonator on one hand, and a falling legal legend using spam to desperately claw its way back to relevancy on the other hand, my guess is the more obvious and logical choice: Spam. It fits with the theory of Occam’s Razor, in that the simplest explanation is usually the right one.

And here is the spam as it appeared elsewhere when I Googled the first sentence: /Martindale-HubbellSpamSearch.pdf). But but when I checked one of the links, to Legal Practice Pro, I found yet a different piece of pablum [ed: subsequently removed] that also brings you to the same M-H site:

I love to read such informative articles. It is good to know what went wrong in which part of the world .. even in distant places, where we do not ever plan to physically visit, we visit there virtually and analyse the complete scene. Thanks for this piece of information to add to my experience! To share my other experiences too, recently, I have come across an article on how efficiently law firms get you the justice, which otherwise, sometimes, gets next to impossible. While reading, I realized how important it is to contact a lawyer whenever you get stuck with any legal related issues. And a family lawyer does not in any way decreases the importance of keeping an international law firms directory handy.

More gibberish. And do you know what happens when you Google one of those sentences? Do I really have to tell you it turns up yet more comment spam? Here is my search result: /Martindale-HubbellSpamSearch2.pdf. How many different pieces of spam M-H uses to camouflage its conduct is not something I know, but I think it’s safe to guess that it doesn’t stop here.

Martindale-Hubbell has been swirling down the bowl for some time now. The Internet basically destroyed their business model. Their ratings system is toast. The company’s death announced by bloggers.

Despite these problems, M-H boasted last week on its blog (what, you didn’t know they had a blog?) that it had received an award for “Excellence in New Communications.” The award was given for “innovative organizations that are pioneering the use of social media…” which gave me a good laugh, but I suppose some might consider spammers to be pioneers.

Is it possible to go lower than a spammer on the web? Probably, but I haven’t seen them use pornography to market the law firms that have hired them.

So what does this mean? It means that the most “venerable brand in the legal community” is now using one of the lowest forms of Internet “marketing” that exists: This is the cyber-equivalent of trespassing on someone’s land (their blog) for the sole purpose of plastering its advertisements. Nice.

I’ve written befefore about attorneys that outsource their marketing also outsourcing their ethics. This happens when one of the bazillion attorney search search sites that have popped up are hired to do promotion for lawyers. The lack of care when it comes to ethical violations or other abhorrent conduct can happen regardless of whether the search site is large or small. (See also, FindLaw’s scandal with respect to selling links.)

When it comes to protecting your reputation, this is one simple rule for lawyers to follow: No one cares as much about your reputation as you do. So when you entrust others to do your work, you are virtually guaranteed a lower standard of care.

Now here some questions for lawyers that use Martindale-Hubbell and give the company some of their hard-earned money:

2. How do your clients feel about spammers?

3. Since you’ve hired M-H as an agent to market for your law firm, how do you feel about your agent being a spammer?

Update: In the comments, David Gilroy, the Sales and Marketing Director of a British marketing outfit called Conscious Solutions takes responsibility for spamming on behalf of Martindale-Hubbell. This, of course, leaves us with more questions than answers, including the question of why M-H is outsourcing its marketing if it claims to be a leader in the field.  And yes, the link I provided is coded as NoFollow to insure that no Google juice goes to this company.

I assume that the response came in from Gilroy because someone at M-H was alerted to my post and forced this guy to throw himself under the bus. As of 8:25 pm when I write this update, however, I haven’t heard anything from M-H as to why they hired this company that has been spamming law blogs.

15 thoughts on “Martindale-Hubbell: Now Sending Comment Spam? (How Does That Rate?) — Updated”