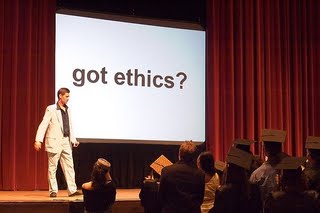 Five months back there was a Metro train crash in Washington DC, and I watched from a distance to see who/how/where/when the web would be used by lawyers to find victims. And one of the things we saw was that one of the gazillion attorney search firms that infect the web was soliciting clients. Given that these search firms are agents of the lawyers, that raised the problem of attorneys using the web to solicit.

The implications of attorneys outsourcing advertising to a third party that may be acting unethically represents an area of law that is unexplored by many ethics committees.

The implications of being the test case are not pretty, and there after now five lawyers in Connecticut feeling the heat, as the state tries to decide if they violated local ethics laws by paying referral fees to the non-attorneys at a site called TotalBankruptcy.com. Some of the discussion goes to differentiating between a mere advertisement like a Google ad, and a “referral” from a search site after it takes in information from the consumer and then spits out a name.

For more on that, you can read Carolyn Elefant (in defense of the five), Scott Greenfield (calling the search service a cancer in the legal profession), Mark Bennett (suggesting disbarment, not saving), Josh King (the rules are unconstitutional), Larry Bodine (looking at the attorney who filed such complaints in 47 states) with both Bob Ambrogi and Colin Samuals doing extensive analysis of all the commentary.

It sucks to be a test case. It’s one of those things lawyers should aspire to avoid.

It wasn’t my intention to coin a phrase regarding this kind of stuff six months ago when I wrote about the train accident and the solicitation, but several others have now picked up that theme so it’s worth expanding on.

When lawyers outsource their marketing to others — be it a “search engine optimization” company, an attorney search company, or some hybrid — they are hiring agents to do their advertising. Agents. We learned about that stuff in law school. The concept has a long and deep legal history. The web didn’t make it go away.

And when it comes to the web, these are five things that those agents might be doing in your name that can get you in big trouble on the web, because attorney ethics are deeply intertwined now with marketing:

It’s interesting to note that simply going out and hiring a high-profile marketing company won’t necessarily help you. For instance, Avvo is one of those find-a-lawyer sites, that also has reviews of attorneys. They’ve made a big splash and are as tech-savvy as anyone. Yet, if you go to their site, which now looks for attorneys to pay $49.95/month for “enhanced” visibility, you will find that they appear to violate one of New York’s ethics rules that went into effect in 2007.

Which rule does Avvo appear to break? The requirement that “attorney advertising” be placed on their home page, a failure that I noted hit many firms at the time it was implemented. Does an attorney search site need to have that mark on it? I would think so, as they are acting as the agents of the lawyers that hired them.

So what’s the downside to all this? Well, the lawyers that hire others to do their marketing might find that company violating copyright law (content scraping) or ethics rules and subject them to litigation and sanctions. This can be long and expensive.

But it’s actually a lot worse than that because litigation takes time and money and many don’t want to do it unless they absolutely have to.

Blogging, however, takes very little time and very little money. And if you piss off just one blogger with ethically and legally dubious behavior, s/he might write about you. And put your name in the headlines. And that blogger might have some readers who are also bloggers….And the effect is felt as soon as Google happens to index those blogs; which is to say if they are active bloggers, immediately. When potential clients Google you, the results can be painful.

Litigation can be so passé.
———————————
The list of blogs that have agreed to expose the lawyers that engage in comment spam has been moved to this link: New Spam Comment Policy for Law Firms (You Will Be Exposed)