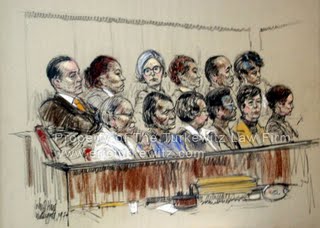 So news comes out that President Obama has skipped jury duty in Chicago. Is that a good thing?

Here in New York, it used to be that there were exemptions from jury duty for lawyers, doctors, and a panoply of others. Everyone and their brother seemed to have a legit excuse. The legislature killed that off, and now all the exemptions are gone. Rudy Guiliani famously sat jury duty while mayor, as did Mayor Michael Bloomberg and former Chief Judge Judith Kaye.

But how about the President?

On the plus side of having him sit, it promotes jury duty and the concept that power is dispersed among the people. The distribution of power among the citizens and away from the Crown was the very essence of the Revolution. The Declaration of Independence, once you get past its magnificent opening, leads into its bill of particulars regarding the usurpations of power by King George with this:

The history of the present King of Great Britain is a history of repeated injuries and usurpations, all having in direct object the establishment of an absolute Tyranny over these States

For depriving us in many cases, of the benefit of Trial by Jury

And this is not just enshrined in the Declaration, but the Bill of Rights. The Sixth Amendment protects those charged with crimes and the Seventh Amendment guarantees juries in civil trials:

In suits at common law, where the value in controversy shall exceed twenty dollars, the right of trial by jury shall be preserved, and no fact tried by a jury, shall be otherwise reexamined in any court of the United States, than according to the rules of the common law.

There is little disagreement among the people of the need for the dispersion of power — though oddly there are conservatives that wish to consolidate power among the few and call this “reform.” This concept of greater government power has thus far been widely rejected. (I never really understood how conservatives that preach limited government wish to endow it with more in this circumstance, but that is an issue for another day.)

Notwithstanding the noble goal of jury duty, any lawyer that has spend 12 seconds in the jury selection process knows that many people want to talk their way out of it, even personal injury lawyers. But I have sat, as has my wife and my brother.

On the flip side of having Obama serve jury duty is the security problem, not just for the courthouse but for the nation as a whole as it requires the man with the button to be in one place for an extended period. Leaving aside the issue of distraction for the other jurors, the forcible placement of the President in one place could turn into a life and death problem for all of us.

So, while I am a huge fan of the jury system, when it comes to the top honcho, I believe that deferment until he leaves office is appropriate.

One thought on “Should Obama Sit Jury Duty?”