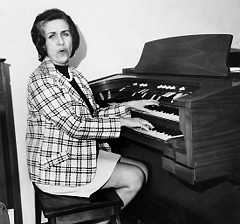 Jane Jarvis, the long-time organist for the New York Mets at Shea Stadium, died last week at age 94. Shea Stadium’s Queen of Melody inspired fans over the course of 15 years, and her playing, oddly enough, held lessons for lawyers. Stay with me here. I have a point this time.

Those of my age that grew up spending times watching the Mets at Shea remember her playing for the fans, and the fans responding, and Jarvis tinkling the ivories back at us. It was like an exuberant conversation during her 1964-1979 tenure as she kept us entertained between innings and during other breaks. Anyone who spent time at the now-gone ball yard remembers Jarvis doing Meet the Mets on the Thomas organ.

Ultimately she was replaced by over-amplified canned music (and a thousand other distractions of the modern ball park). But canned music, of course, can’t respond to the fans. Her playing was personal. She could see and hear what was going on, and speed up, slow down and modify on the fly. Live music is like that.

So where does the law come in to this? Lawyers often used canned materials too. We borrow briefs and memos from others for use.

But here is the important part: Too many lawyers, it seems, borrow the brief and don’t actually read it. They don’t make it personal to the actual facts of the case. The writing doesn’t crackle with originality and pertinence, because oft times it is neither.

I once read a brief that was filled with “this honorable court” and “respectfully” this and “respectfully” that, and behind all the obsequious writing was garbage. I always figured that if one wanted to be respectful to the court, one would tailor the brief to the actual facts and points that needed to be made. The writer would make it easy on the eyes instead of forcing the judge (or clerk) to go burrowing through the darn thing trying to figure out what the actual point is.

Other briefs I’ve seen over the years have clearly been filled with cut-and-paste from other briefs, or straight out of WestLaw. It’s pure laziness and the message that the judge no doubt receives is, “If the lawyer didn’t care, why should I?”

There isn’t anything intrinsically wrong with a form book, of course. If you are doing something for the first time it’s good to see how someone else did it. The mistakes are in believing that this the only way to do it, or that the form shouldn’t be changed at all. The mistake is in ignoring your audience.

Jarvis used sheet music to get her songs down when learning them. But then she adapted each song, just as the lawyer must adapt each and every argument (if, that is, you actually want to communicate a point to the judge)

Jarvis was a virtuoso when it came to the organ and the crowd. And that was because she didn’t sit back and rely on the forms she started with.

A 2008 article in the Daily News described Jarvis’s experience this way:

When it comes to music and the Mets, Jarvis once wrote the book. “I made all the decisions,” she says. She had a song for when the Mets trotted to their positions, and a song for when they smacked a homer, and then there was the Mexican Hat Dance to get things going when the home team really needed it during the seventh-inning stretch. An entire generation of Met fans came to identify the team’s championship run in 1969 with her lilting keyboard work.

(P.S. Pitchers and catchers report in 17 days. I think Jarvis would want me to mention that)