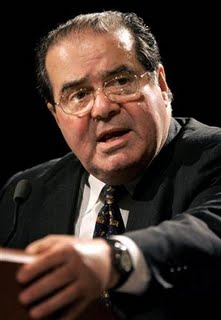 The right of a state to secede from the nation is way outside my personal injury wheelhouse. But it has become a source of conversation on professorial and political blogs, and the concept has generated interest from the Tea Party movement.

As it happens, my brother has a letter from Justice Antonin Scalia that is directly on point as to the legitimacy of secession. How he got that letter, and its contents, are the subject of today’s post.

The inspiration for writing, and the release of the letter, comes from Prof. Eugene Volokh, who wrote, “I keep hearing the claim that the legitimacy of secession from the U.S. was ‘settled at Appomattox,’ and I wanted to say a few words about why I think that makes little sense.”

The good prof goes on to write that, while clearly not supporting secession of any State in concept, that the issue is far from settled. He writes:

If in 2065 Alaska, California, Hawaii, or Texas (just to consider some examples) assert a right to secede, the argument that “in 1865, the victorious Union government concluded that no state has a right to secede in opposition to the wishes of the Union, so therefore you lack such a right” will have precisely the weight that the Americans of 2065 will choose to give it — which should be very little.

Well prof, Justice Scalia disagrees with you. Explicitly. Why did he do so in a letter to my brother? Glad you asked.

Dan is a screenwriter (whose screenplay Tranquility Base was just named a finalist at the Vail Film Festival, and previously took top honors elsewhere). Back in 2006 he started working on a political farce that had Maine seceding from the United States and joining Canada.

Bro was well ahead of the tea partiers in contemplating impending problems as we racked up massive debt. This doesn’t get him an agent or a foot in the door of Hollywood to get his screenplays made into films — it isn’t what you write, but who you know — but it does make him a prophet of sorts.

So, on a lark, he wrote to each of the 10 Supreme Court justices (including O’Connor) with this request:

I’m a screenwriter in New York City, and am writing to see if you might be willing to assist me in a project that involves a unique constitutional issue.

My latest screenplay is a comedy about Maine seceding from the United States and joining Canada. There are parts of the story that deal with the legality of such an event and, of course, a big showdown in the Supreme Court is part of the story.

At the moment my story is a 12 page treatment. As an architect turned screenwriter, it is fair to say that I come up a bit short in the art of Supreme Court advocacy. If you could spare a few moments on a serious subject that is treated in a comedic way, I would greatly appreciate your thoughts. I’m sure you’ll find the story very entertaining.

I told Dan he was nuts. I told him his letter would be placed in the circular file. And then Scalia wrote back. Personally. Explicitly rejecting the right to secede: 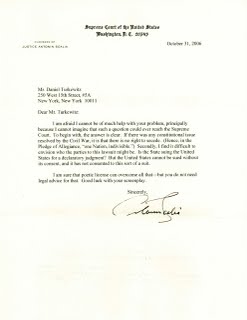 I am afraid I cannot be of much help with your problem, principally because I cannot imagine that such a question could ever reach the Supreme Court. To begin with, the answer is clear. If there was any constitutional issue resolved by the Civil War, it is that there is no right to secede. (Hence, in the Pledge of Allegiance, “one Nation, indivisible.”) Secondly, I find it difficult to envision who the parties to this lawsuit might be. Is the State suing the United States for a declaratory judgment? But the United States cannot be sued without its consent, and it has not consented to this sort of suit.

I am sure that poetic license can overcome all that — but you do not need legal advice for that. Good luck with your screenplay.

So there you have it. At least one vote solidly on record as saying that there is no right to secede. And it likely comes from a place the right wing secessionists most wanted to have a vote.

And yes, Dan still needs an agent. Because writing great scripts isn’t enough if you don’t know The Powers That Be on the other coast. And, for what it’s worth, his now-completed script of Maine joining Canada is better than his award-winning one about a mis-adventure in space.

(Update: — Welcome new readers…there seems to be a fair share of incoming to this little joint)

Update #3: In November 2013, in the wake of the Obama-Romey election, this posting returned to the news.

Elsewhere on the issue of secession:

Nearly one-third of Georgia Republicans would be in favor of leaving the United States, its polling shows. Pause here for any ironic thoughts about the party of Abraham Lincoln that suddenly spring to mind.

82 thoughts on “Scalia: "There Is No Right to Secede"”