Welcome to April 2nd. And that means a deconstruction of what happened on April Fool’s Day when I announced that I was going to become the official White House law blogger.

The basic idea was this: A bunch of law bloggers would try to punk the political bloggers, whose reputation is to grab any old rumor and run with it. Fact checking hasn’t always been the strong suit of this community.

But the political bloggers, to their collective credit, didn’t bite, despite wide dissemination of the story. Not on the right or the left. Instead it was the vaunted New York Times that ran with the story without bothering to check its facts. The Times, of course, had no sense of humor about it when the angry phone call came to me a couple of hours later.

Here’s how it played out: Knowing that the premise of me getting such a gig was, shall we say, a tad far-fetched, I enlisted some heavy-duty muscle to give it credibility. Without others watching my back, I knew the ruse wouldn’t get off the ground.

This was the plan:

At 9 am Above the Law uses its megaphone by putting it in the Morning Docket. Those that come to read my post will likely think it’s an April Fool’s gag.

Patrick @ Popehat (who last year pranked the world by creating the North Korean Twitter Feed) follows at 9:30 with a rip-snorting, barn-burning denunciation of my appointment, filled with speculation and innuendo trying to feed red meat to the political right. It would be a parody of a political attack, if it were still possible to parody such attacks anymore. (see: I Guess John Edwards Wasn’t Available) Patrick also has a source inside the Senate Judiciary Committee to give the appointment credence, albeit an anonymous one.

Scott Greenfield @ Simple Justice pitches in on petty political problems within the office of the White House Press Secretary. Those problems arise since I won’t be answerable to this department, but only to the White House Counsel. The Press Secretary is mad about that. (see: Turkewitz: Honest Broker or Loose Cannon?) Now, if the WH denies the story, I have a good reason. His source inside the press office was anonymous.

The underlying idea was to give people second thoughts about the story’s legitimacy, because practicing lawyers would never set themselves up to be skewered like this and have their Google reputations trashed for years to come. (Hey guys, can you, ahem, edit those stories now?)

So, I have the ATL megaphone followed by three reputable bloggers confirming my appointment with three anonymous sources on a day everyone is looking out for pranks. Would anyone be taken?

Just to be sure, I tried to put some mustard and relish on the hot dog:

Doug Mataconis @ Below the Beltway pitched in with complaints about my appointment from the perspective of opposition to the health care bill. (see: Medical Malpractice Attorney Appointed White House Law Blogger)

And Walter Olson @ Overlawyered was on tap to likewise pan my selection, if he was able to get to a computer (he Twittered it).

Now let’s ask again: Would anyone be taken by this motley consortium of co-conspirators?

Silly question. Of course someone would. Who needs bona fide confirmations in the digital age when speed is more important that accuracy? Everyone wants to beat everyone else to the headline. And the illogic of someone setting himself up for a digital thrashing provided cover for the preposterous nature of the whole endeavor.

While I may have certain skills as a trial lawyer, none of them prepare me for a position in the office of the White House counsel expounding on constitutional law issues I haven’t dealt with before.

The comments came in via email and blog comments, on Facebook and on Twitter. I felt bad for my friends that were taken in. But only a little bit. My friends know how to laugh. And so do my digital friend co-conspirators.

But the political blogosphere, as I mentioned earlier, never bit.

Perhaps one reason (aside from it being a silly endeavor), is people love to expose a ruse, making it more difficult to pull off on such a high-profile day. Even before I made it to the office, the ABA Journal had very strongly hinted at a stunt. Their post is time-stamped 6:46 AM CDT. Ouch. They even gave a run-down of my a prior April Fools hoax I ran regarding fantasy baseball and judicial recusals. It was almost like they were waiting for me.

By 1 pm, Ashby Jones at the WSJ Law Blog was emailing me, trying to get me to ‘fess up. Seems he had called the White House for confirmation. (See: White House Hires Personal Injury Lawyer to Launch New Blog.) He conceded “we were had” and was, to be sure, a terrific sport about it when he tried again (this time by phone) to pry the secret out of me. The White House, he said, claimed it was an April Fool’s joke. The WH was apparently ready for this because, by 9 a.m., I already had hits from the service provider “executive office of the president usa” as well as the “us department of justice.”

But the New York Times didn’t bother to fact check. Not with me. Not with the White House. And not with Google, which already had the stories from both the ABAJournal and the WSJ by the time they ran the story at 2:05. The Paper of Record blogged in it’s City Room this piece on When Lawyers Blog:

…After all, as Mr. Turkewitz, a Manhattan lawyer, writes on his New York Personal Injury Law Blog, he is about to be sounding off on all manner of legal issues as the Obama administration’s new White House law blogger.

“Excited about new blogging gig as White House law blogger,” he tweeted this morning. “But hope I don’t have to spend too much time in D.C.”

At 4:45, I received a phone call from an infuriated “Andy Newman” from the New York Times demanding to know if this was an April Fool’s joke. Unlike the classy Ashby Jones, Newman had zero sense of humor and demanded that I answer “as an officer of the court” or he would pull the post down.

I tried not to laugh, and told him that due to concerns in the White House about me jumping the gun on the story (as per Orin Kerr’s post @ Volokh), I really shouldn’t say anything and would clear it up tomorrow. This clearly wasn’t good enough for him as he hung up on me, and down came the NYT post. The Times, I guess, doesn’t like being punked on April Fool’s Day.

The Times then updated its piece with this editorial comment:

[Note: an earlier version of this column had an item about a blog post by a personal-injury lawyer, Eric Turkewitz, announcing that he had been appointed the White House law blogger. Blogospheric chatter indicates a high likelihood that this post was an April Fool hoax. Mr. Turkewitz declined to give us a straight answer on this score, so, pending callback from the White House, we’ve taken the item down.]

As of 6:30 a.m. on April 2nd, the new comment about a a “pending callback from the White House” is still up, so maybe The Times is losing its muscle in the White House. Hopefully, my new best buddies in Washington weren’t too upset about getting the press inquiries. 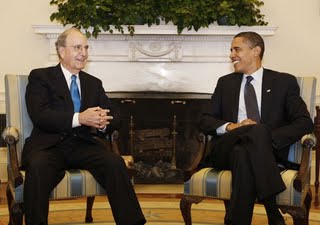 So where did the idea come from? It came from my screenwriting brother Dan, who has no shortage of story ideas, and who was recently in the news because of the letter Justice Scalia wrote him regarding secession. He was also the one that stuck my head on the body of former Senator George Mitchell for my photo op with President Obama (compare to picture at top).

Incredibly, one commenter at the Volokh Conspiracy actually knew this was a picture of Mitchell. How? There must be a million photo op pictures like this. Which leads me to believe that Sen. Mitchell himself or his wife/kids/friends/staff must be reading and commenting. (The same comment was left on my site, which I declined to publish so the gag wasn’t too quickly exposed.) So let me give a big shout-out to the Mitchell family, and thank them for tolerating my comments about George’s posture. 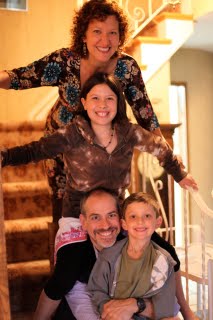 My wife, by the way, hated the head shot that was photoshopped on to Mitchell’s body, since she said it made me look 20 years older than I am. So for Mrs. NYPILB (she loves that acronym), I’m putting up another that was taken the same day.

Now one final question: Why the hell would I go to all this trouble for an April Fool’s stunt?

I’m glad you asked: Lawyers often deal with misery. Peoples’ lives can be forever changed in a fraction of a second in an accident. Divorce. Child custody. Bankruptcy. Arrests. There is no real end to the chain of human misery that clients bring to the doors of practicing attorneys.

So the April Fool’s post is a count-your-blessings kind of thing. You only live once and life doesn’t come with rehearsals. If you can enjoy yourself a little without hurting someone else, then that’s OK. Laughter isn’t the antidote to all of life’s ills, but it sure doesn’t hurt. Unless, of course, you’re the Paper of Record.

Numerous additional links to the gag are at this welcome post for new readers.