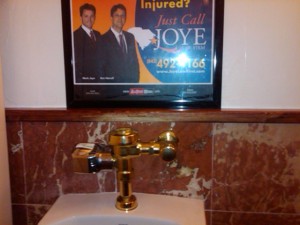 Advertising over a urinal has one thing going for it: A captive audience.

But is that really the association that you want for your law firm?

From Myrtle Beach, South Carolina, the Joye Law Firm apparently doesn’t have a problem with it, as you can see by these two pictures.

I thought this part of their website ad copy, where you can choke on all the SEO going on, was interesting:

When you come to the South Carolina personal injury lawyers at Joye Law Firm after a serious injury or accident, expect to be treated with the utmost respect, compassion, consideration, and care. 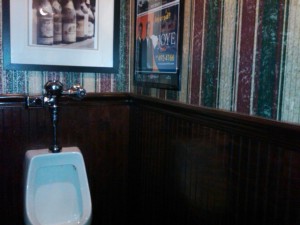 So how do you respect someone that advertises professional services over a urninal?  Scott Greenfield at Simple Justice likes to write about much of legal advertising being a race to the bottom. Which means that, to beat this ad, someone will have to advertise inside the stall.

Talk about timing. It was just last week that I quoted federal judge Frederick Scullen when he wrote:

Without question there has been a proliferation of tasteless, and at times obnoxious, methods of attorney advertising in recent years. New technology and an increase in the types of media available for advertising have exacerbated this problem and made it more ubiquitous. As a result, among other things, the public perception of the legal profession has been greatly diminished.

OK, so this isn’t new technology run amok; just good old-fashioned tastelessness. Perhaps the Joye Law Firm was hoping, while men held onto themselves, for a play on the firm’s name?

Photos courtesy of my spy who wishes to remain nameless.