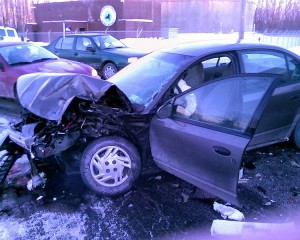 This is a follow-up to my post on my April 26th post: New York’s No-Fault Law To Finally Be Updated?

That post dealt with the Byzantine mess that our courts have made of our primary auto accident statute regarding injuries and when people can sue, and how the same fact patterns lead to different results depending on the bench. This is due, in large part, to vague statutory definitions of what constitutes a “serious injury.”

The newly proposed legislation (S07518, A10739) would bring clarity to the law and guidance to the courts. The main legislative target is the judicial requirement for the presentation of objective evidence of a “serious injury” as defined by Insurance Law 5102(d) within a set time (“contemporaneous”) after the accident.  The “objective evidence” and “contemporaneous” language does not appear in the statute. The intention of the amendments is to prevent the dismissal of those cases where there is a “serious injury.”

Roy Mura dealt with this from the defense side at his blog, Coverage Counsel and asserted that there “will dramatically expand the number and kind of personal injury lawsuits that can be brought and tried in New York State.” Mura worries that each sprain and cut (are stitches surgery?) will somehow qualify as a serious injury.

But it is not claimed by the bill’s supporters that small or minor injuries should be allowed to pass over the No-Fault threshold.  It is claimed, however, that the invisible “statute of limitations” to obtain objective medical evidence contemporaneous with the accident raises an unacceptably high risk of the summary dismissal of claimants who would have been able to prove the existence of a “serious injury” at trial, but who for non-medical reasons were unable to present contemporaneous objective medical evidence in opposition to a defendant’s summary judgment motion.

Such cases should not be summarily dismissed without regard to the evidence submitted, merely because plaintiffs did not know, and could not have known, what kind of tests they had to ask for from their doctors in order to pass the court’s high evidentiary requirements.  More flexibility is required in recognition of the fact that this evidence, through no fault of the plaintiff, is sometimes not obtained in time, or the victim’s doctor happens to keep lousy notes and isn’t litigation savvy.

Since it’s the policy of New York’s judiciary system that actions should be resolved on their merits, it is unfortunate that the current system raises the risk of dismissal based solely on whether the plaintiff’s doctor was informed enough to do range of motion testing (which s/he may have felt was not needed), properly record and describe it, or was available and willing, years later, to authenticate the evidence in admissible form.  It should be self-evident that the harsh, mechanical application of this rule will bring unjust results.

Instead, the focus should be on what is just.  Dismissing cases with evidence of a causally related serious injury,  solely because of the unavailability of objective evidence contemporaneous to the accident, without considering the rest of plaintiff’s evidence, does not accomplish the goal of the No-Fault law. Since those who have a “serious injury” can be thrown out of court under such an interpretation of the statute, it is an outcome that the legislature did not intend.  The No-Fault bar is not intended to dismiss the cases of people who can prove a serious injury, and it should be acknowledged in the law that a lack of objective contemporary evidence establishing duration of injury and proximate cause can exist in a case where there is nonetheless a causally related, longstanding serious injury.

Finally, while the function of Insurance Law 5102(d) and 5104 is to winnow out minor injuries, the function of summary judgment is to determine the existence of bona fide triable issues of fact.  Requiring objective proof of proximate cause and duration of symptoms to raise an issue of fact on a threshold motion, where, for no fault of the plaintiff, such evidence was not obtained in time and preserved, demands more than a mere issue of fact, and raises the threat of injustice in the form of the dismissal of cases where the plaintiff has submitted sufficient prima facie evidence of a serious injury.

There is yet  more on this issue in today’s New York Law Journal, in an article by Kevin R. Morrissey, who is the principal law clerk assigned to Justice Martin Schneier of Supreme Court, Kings County. He writes, however, in his own name.  (sub. req.) Insurance Law ‘Threshold’ Rules Encroach on Trial Practice.  In the article, Morrissey describes how the Appellate Division (Second Department) is now taking the summary judgment language and grafting it on to post-trial motions where a jury has already found that a serious injury has occurred. (see: Jourbine v Ma Yuk Fu)

By grafting the requirement of contemporaneous range of motion testing onto its definition of a serious injury, the Second Department has effectively made this part of the plaintiff’s prima facie burden at trial. This creates substantial problems, particularly for the plaintiff’s bar.

The crux of the problem is that, because the requirement of contemporaneous testing is contained in neither the statute, nor the pattern jury instructions, it is not an issue that plaintiffs are obliged to prove before a jury….

Intellectually, it is disconcerting to have summary judgment criteria that are different than those that constitute the plaintiff’s prima facie burden. In this respect, it is sensible that the rules developed for summary judgment should be the same as those applied at trial. However in the context of the threshold law, these rules were developed to reduce the burden on the courts by allowing them to “weed out” cases that lack merit.11

By the time a plaintiff rests at trial, however, this burden is almost entirely resolved. Moreover, integrating these extra-statutory rules into the plaintiff’s prima facie case renders it inconsistent with the jury instructions and interrogatories. These issues should be considered by the appellate courts should Jourbine be revisited.

Our No-Fault law continues to be a mess, and it is long past time to see the legislature clarify it.