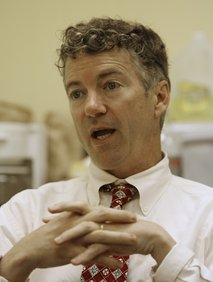 Kentucky’s Republican Senate candidate Rand Paul was critizing President Obama for critizing BP for the gulf oil spill, and this spilled out of Paul’s mouth:

“And I think it’s part of this sort of blame-game society in the sense that it’s always got to be somebody’s fault instead of the fact that maybe sometimes accidents happen,” Paul said, who is a darling of the Tea Party movement.

Some folks, like Paul, are quick to dismiss “accidents” as if they are a part of nature. And that is because the word is used in two completely different contexts; accidents that are avoidable and accidents that aren’t.

Take this example: A deer bolts onto a highway at night and collides with a car. I think that, in most circumstances, people would attribute that to an act of nature. But after the first “accident” a second car plows into the first. Is that also part of the “accident”?

Now we have multiple causes. And the primary cause of the second wreck — note that I don’t use the word accident here — is that the second car was simply following too closely to the first. This is the case in almost all rear-end collisions. Each driver has a duty to anticipate a problem and must be prepared to stop in time.

The operative legal premise here is this: Could the “accident” have been avoided with the exercise of reasonable care?

Vetting the Rand Paul types in jury selection is pretty critical, as they are more likely to simply shrug their shoulders with an “accidents happen” attitude. As we can see in the BP fiasco in the gulf, Paul doesn’t appear interested in whether the oil spill was avoidable with the exercise of due care.

So what does the savvy trial lawyer do to find these people in the jury pool? Answer: Let them talk. Ask open ended questions, not the yes-no types. Jury selection isn’t about finding jurors with the same ethnicity as your client, but finding out about their underlying value system.

8 thoughts on “Rand Paul: “Sometimes Accidents Happen” (And the Lesson for Jury Selection)”