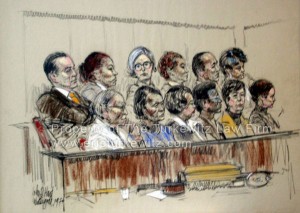 In 1997 I sat as a juror. And a post by  Scott Greenfield on whether criminal defense attorneys would make good jurors in a criminal case, and the fact that I picked a jury last week and just re-told my experience to opposing counsel, leads me to today’s reflection on whether personal injury attorneys could sit fairly in a personal injury case.

The question can equally be asked, of course, about whether doctors and nurses can sit in malpractice cases, and you can follow this through for any other profession.

But first my experience: This was a criminal prosecution, the nuts and bolts of which were that two guys were walking down the street in midtown Manhattan peering into cars, while being trailed by two undercover cops watching the peering. One was on trial, and we weren’t told why the other wasn’t.

There were about 30 jurors in the pool, and I was the very last one to be questioned. And this was the interesting part: There wasn’t a single question on what type of law I practiced. Calling the questions perfunctory would be an insult to the concept of brevity.

The trial lasted two days, and consisted of the two perps stopping at a fish truck — yes a fish truck — and the cops watching from a neighboring deli while the defendant and his buddy tried to make off with the shrimp. In the middle of the afternoon, in the middle of midtown. They did not win any awards for genius that day, or likely,  any other day of their existence. One cop broke the tip of his pinkie grabbing the guy that was standing trial. That added a charge.

When we got the jury room, I spoke quickly before anyone had a chance to voice their opinion and dig into any position. I’ve had juries that were out deliberating for days, and I didn’t want anyone to stake out a position quickly, because changing minds after they are made up can be difficult.  I asked my fellow jurors to simply comment on one piece of evidence that they thought was interesting, without saying whether the guy was guilty or not.

That discussion gave him 30 minutes of deliberations, which I think we all later agreed was 29 minutes more than he deserved, but it was good to flesh out the evidence that we heard. Everyone wanted to do the right thing.

Afterward, I asked both the prosecution and defense counsel why they kept me. The prosecutor said she wanted someone that was smart for a slam-dunk case (though all she knew was that I was an attorney). Defense counsel said he liked lawyers, because lawyers were always looking for loopholes.

It was, I think fair to say, an experience any trial lawyer should go through. It’s good to appreciate on a first hand basis what happens on the other side of the jury rail.

My biggest reaction to the questions and answers that flew during trial, however, was the urge to leap over that rail, push the lawyers out of the way, and say “That’s not how you ask a question. Here, let me show you…”

My experience, both as a juror and as one that has spoken with thousands of picked and potential jurors, is that most people that get picked truly want to do justice. Most people. Though their visions of justice may vary quite a bit.

And the trick is, obviously, ferreting out the bad apples, which is to say, those whose ideas of justice may be vastly at odds with your client’s. Can the doctor sit on the malpractice case or the PI lawyer on the PI case (or the criminal defense lawyer on the criminal case)? Sure. Why not?

Do you think that plaintiffs’ personal injury attorneys  would be biased in favor of all plaintiffs? If you thought that you would be very wrong. Because we all see something that the public doesn’t see. We see all the reject cases that aren’t worth a damn. There was no negligence, or if there was, it didn’t cause an injury. Of if there was, the injury was too small to make it worthwhile. Or the potential client wasn’t credible to us. Reject, reject, reject. In the malpractice realm, I reject a healthy 95-98% of the time.

A juror has to know how to reject  a bad case, and this is something we are used to doing. In fact, if we don’t do it well, we face bankruptcy because it is our time and money that is being spent on the matter. The contingency fee system can be harsh that way. This tends to make us rather objective in evaluating suits.

And the doctors? Some can sit, some can’t. Some are so wrapped up in the politics of medical malpractice “reform,” drinking the insurance industry Kool-Aid, that they are too biased. Others have no problem sitting, as they often see the screw-ups of others, and some have been angry about those screw-ups.

So you gotta ask those potential jurors, since you only have three peremptory challenges to work with here in New York, to look inward. “How will you feel,” you ask the doctor, “To tell your co-workers that you brought back a verdict against a doctor, assuming you think the verdict is justified?” And you watch the reactions, the hesitancies, and listen for the word choices they make. Some are comfortable with it, some not.

Jurors pick themselves. Some can do it when the issues are close to their profession, some not. There’s little point being coy about it and ignoring the elephant in the room. You ask.

In Greenfield’s case, the judge excused high profile defense lawyer Gerry Shargel. Why? Mayor Mike Bloomberg sat jury duty. So did Rudy Giuliani. And Chief Judge Judith Kaye. No one is excused. If the lawyers think the person can’t be fair, so be it, but the idea of dismissing people just because of their occupation is something we don’t do in New York anymore. Because some of those potential jurors might turn out to be damn good ones.

8 thoughts on “My Turn In the Jury Room (And Who Should Sit Jury Duty On What Kinds of Cases?)”