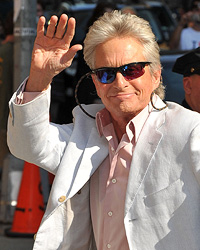 The story of actor Michael Douglas and his stage-four throat cancer caught my eye when reading about an appearance last night on David Letterman, and I saw the comments of his enraged wife, actress Catherine Zeta-Jones:

Meanwhile, his wife Catherine Zeta-Jones is fuming at doctors for not diagnosing it months ago.

“It makes me furious they didn’t detect it earlier,” she told People magazine in its latest issue. “He sought every option and nothing was found.”

When people fume about the perception of bad medical treatment, they often turn to lawyers. And those lawyers will look at exactly what tests were done in the face of the complaints being made.

Now I have no idea if this will result in a medical malpractice suit. I haven’t seen the records and I merely opine based on press accounts. But anger is one of the great motivating factors for hiring counsel to investigate whether medical malpractice occurred. When folks aren’t angry, and they get apologies from medical personnel for instance, suits are less likely.

And that isn’t just my opinion. In a 2008 story in the New York Times (Doctors Say ‘I’m Sorry’ Before ‘See You in Court’), medical professionals are found to be increasingly agreeing:

For decades, malpractice lawyers and insurers have counseled doctors and hospitals to “deny and defend.” Many still warn clients that any admission of fault, or even expression of regret, is likely to invite litigation and imperil careers.

But with providers choking on malpractice costs and consumers demanding action against medical errors, a handful of prominent academic medical centers, like Johns Hopkins and Stanford, are trying a disarming approach.

By promptly disclosing medical errors and offering earnest apologies and fair compensation, they hope to restore integrity to dealings with patients, make it easier to learn from mistakes and dilute anger that often fuels lawsuits.

Malpractice lawyers say that what often transforms a reasonable patient into an indignant plaintiff is less an error than its concealment, and the victim’s concern that it will happen again.

Despite some projections that disclosure would prompt a flood of lawsuits, hospitals are reporting decreases in their caseloads and savings in legal costs…

Now I presume that Douglas and Zeta-Jones are more than a bit comfortable, financially speaking. And any suit that might be contemplated wouldn’t be about the money. In fact, the money might be so small relative to their wealth that if suit were filed I could easily see it accompanied by a statement that any recovery would be donated to a charity.

And such a suit would not just deal with whether doctors acted reasonably. For even if there were departures from accepted care, they would still have to prove that the delay was medically significant. All I see from the story is “months,” so much is obviously unknown to the public.

One should not presume, by the way, that just because a celebrity (or his/her family) brings a malpractice suit, that a jury will ignore evidence and side with them.  After John Ritter died from an aortic dissection, a medical malpractice and wrongful death suit was brought. While some defendants had settled, some defendants refused. And it was a defense verdict despite the big name at the center of the suit.

2 thoughts on “Was Michael Douglas the Victim of Medical Malpractice?”