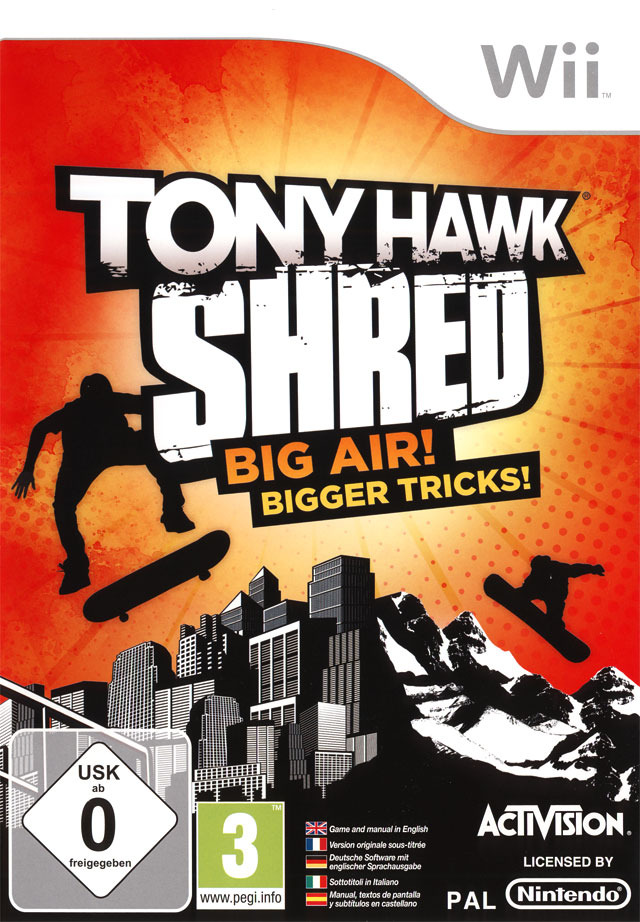 Personal injury law is a consumer issue, usually dealing  with individuals battling corporations. But I’ll stray off that theme a bit today, to review a consumer product I did battle with over the weekend. It’s my blog and I get to do that kind of thing, especially if the product ticks me off because it doesn’t work.

Tony Hawk, for those that don’t know, is a skateboarder. One of the best. And he’s making a killing, it seems, by licensing his name to products as Tony Hawk, Inc.

One of those products is a video game designed for the Wii called Tony Hawk Shred, marketed by a company called Activision. Activision had marketed Guitar Hero, a mega-hit video game with a guitar used as the controller, so maybe the company thinks consumers will buy any game they distribute.

If you are the type to think that way, let me clear it up today with this review: Tony Hawk Shred is not yet ready for prime time. After a few hours of hook-up attempts and product returns, on behalf of a certain child that sleeps down the hall from me, I never did get this thing to work.

This is the idea for the game: A disc goes into the Wii computer, and you use a mock skateboard/snowboard filled with hi-tech doo-dads that’s placed on the floor for the gamer to stand on. The board is motion-sensitive and is supposed to act as a controller, the same way a handheld joystick might. Then, if it actually works properly, it responds to the user as it gets turned, jumped, grabbed and otherwise tricked upon to mimic skateboarding or snowboarding. As I said, that’s the way it’s supposed to work. You can see the commercial for it on YouTube.

Why would I review such a product on this blog?  Because my 8-year-old boy — who loves to skateboard and snowboard — got one from his Nana as a present, and that means Dad hooks it up if it’s beyond the kid’s capability. So I tell said kid to try to do it himself, because he should learn how these things work, and because my video game experience is rooted in Pong, PacMan and Asteroids a few decades back.  I confess that I also dabbled a bit in Solitaire and Minesweeper in the early ’90s when I had my first computer, but let’s face it, I peaked with Pong. No one will confuse me with a joystick cowboy. So the smart money bets on the kid to hook it up if he can. 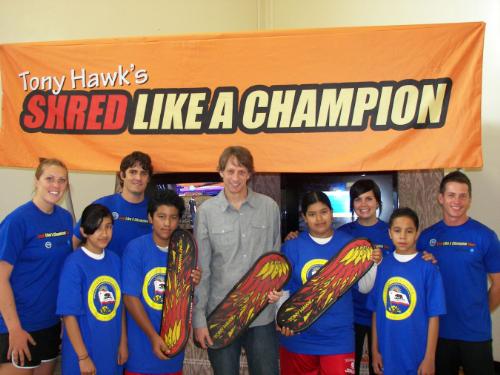 Tony Hawk, center, showing off the controller board with fans who clearly were not in my basement this past weekend

But he couldn’t. So down to the basement I went. And the problem he seemed to be having is that the controller/board has to first be “calibrated” to the Wii. I don’t  know exactly what that means, but I do know that the Wii computer has to talk to the board/controller computer and that this dance between the two is a necessary step to start the game.

So after the kid tried and failed, I took a crack at it. And 45 minutes later, I hadn’t done any better. The instructions were simple, and after following, re-following, re-starting, re-booting, changing USB ports, changing batteries, and standing on my head to spit nickels, I finally buckled and called Activision’s technical support.

By a show of hands: How many think I could get a human on the line in less than 20 minutes? Right. Does anyone actually like these electronic answering service systems, other than the companies trying to save money by not hiring enough staff?

But I eventually got the human, finally, and she told me to move everything in the room at least four feet away from the board, so the board’s sensors wouldn’t be effected. And to move any heavy metal objects away. But after re-arranging my basement so the magic board sat there in the center by itself like some museum diamond, and even standing in another room to make sure not a hair moved in the vicinity of the computers while they tried their calibration flirtation, we still didn’t have a calibrated skateboard/snowboard. And we know it didn’t work  because there was Tony Hawk on the TV telling us so.  Over and over and over again.

Only after hanging up, however, did I realize that she had given me the same number I had just dialed. Back into the electronic answering system I went, as the steam blew out from my ears.

Before going on, let me give you a tip if you have the misfortune of calling Activision technical support and being trapped inside its virtually humanless  hotline. If you want an actual, living, breathing person to help you, do not speak any of the following logical commands at the voice prompt: “Help.” “Customer Service.” “Human being.” “Representative.” Nor should you repeatedly pound on the “O” as this won’t get you an operator, though it might get you disconnected so that you have the pleasure of starting all over yet again.

No, the magic words are “Live Agent,” to distinguish it I suppose, from the dead agent robots that the evil mastermind designed to exhaust  your patience and have you hang up, so that Activision and Hawk need not pay more salaried humans. Most people, I suspect, will hang up in frustration after being unable to find a human on the hotline, which I guess is the idea.

Back to the story: My new Live Agent — a perfectly pleasant gentleman who I imagine is forced to put up with this crap all day long for those that can get through —  suggests our particular game might be a warranty issue, which I understood to be a polite way of saying I have a lemon. So I call the store to swap it out and start all over, except of course that they have none in stock. Nor does the store in the next town over, but I do find one in the Bronx, and finally fight my way through the crowds for the swap. The salesman who did the swap told me he’d heard of problems with the Wii version of the game.

Now you know where this is going, right? The second piece of crap was just as bad as the first. The controller, that being the board, refused to calibrate.  We never did get the game working. 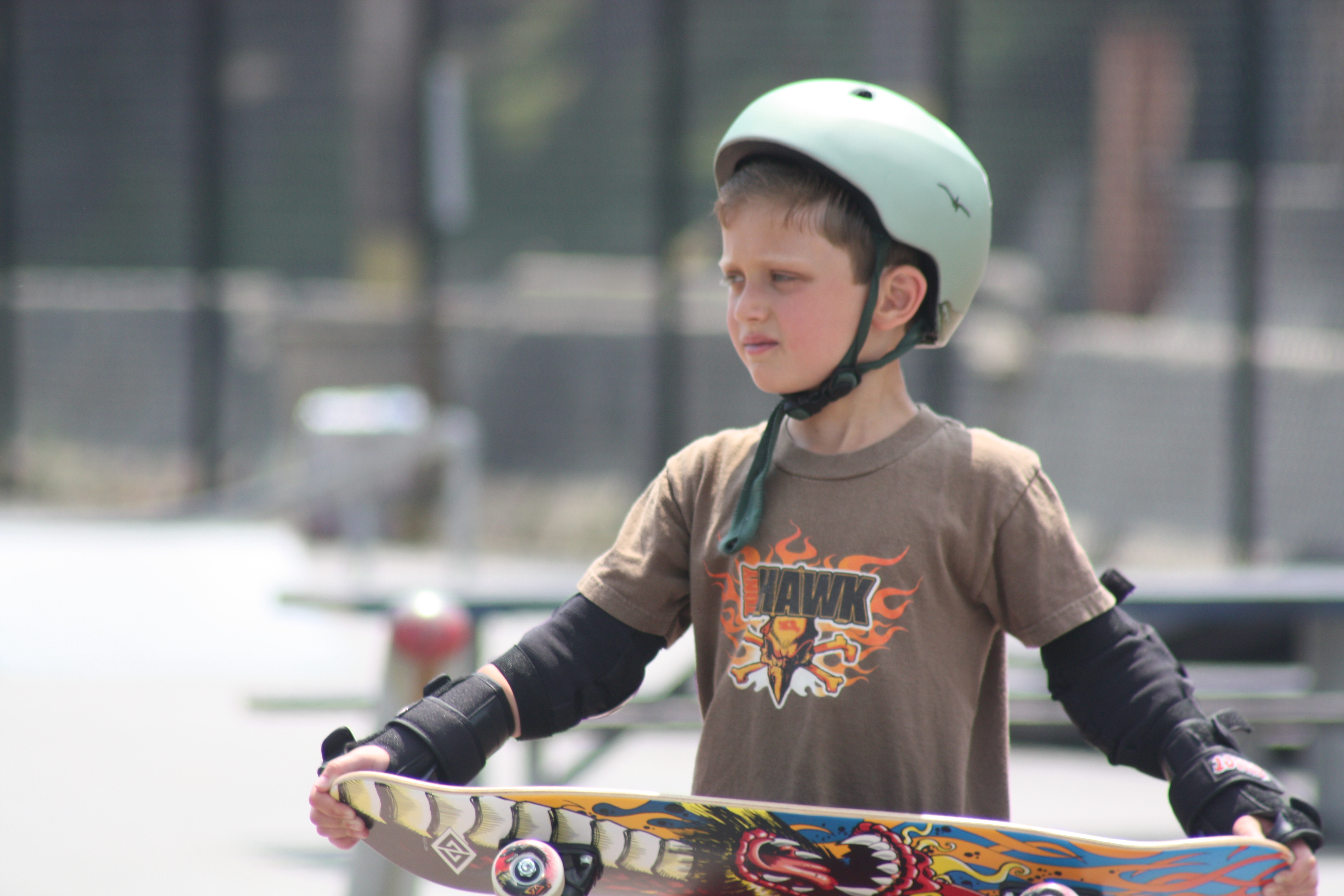 The kid with his skateboard and Tony Hawk shirt, before he got the crappy game as a present

By this point, my kid had developed a new mantra. It goes like this: “I hate Tony Hawk.”  I doubt he’ll wear the Hawk shirt again that you see him sporting in the photo to the right. I thought about telling him that Hawk probably didn’t design either the hardware or software; that he’s  just an athlete that licensed his name. It wouldn’t be a bad lesson for a kid.

But then I thought, why should I defend Hawk? He wanted the money so he created Tony Hawk, Inc. and licensed his name. And besides, he claims to be involved in making the games. If he wants to preserve his name he must make sure the stuff with his name on it actually works. You don’t get to take the good stuff (money from licensing) without risking the bad (lost fans and shredded reputation if the product stinks).

When I brought the game back for a refund the salesman told me that the model released last year (Tony Hawk’s Ride) was also riddled with complaints about the Wii version. This was supposed to be the new and improved model. You’d think they would have worked the bugs out of the system with this one. But the guy told me that people will buy anything with Hawk’s name on it, so maybe management (and Hawk himself) don’t really care?

When I buy a computer, I expect it to work. Which is why I’ve used Macs since around 1995. And when I need to call tech support, Apple taught me to expect a person on the line that will actually help.  Tony Hawk’s Shred for Wii fails miserably with respect to both the game itself and the support it offers.

But wait, there’s more! You know that prompt  you sometimes get asking if you’d like to take the customer satisfaction survey at the end of the call? The one you always answer “no” to? This time I said yes. And as promised, the call came in two minutes after I hung up with tech support. And this was the kicker: After one question the customer survey line simply went dead. The company couldn’t even do that right. Or, perhaps, they really don’t want to know.

But at least I know this blog works.

57 thoughts on “Tony Hawk’s Shred for Wii by Activision (Review: How Many Ways Can you Say Awful?)”