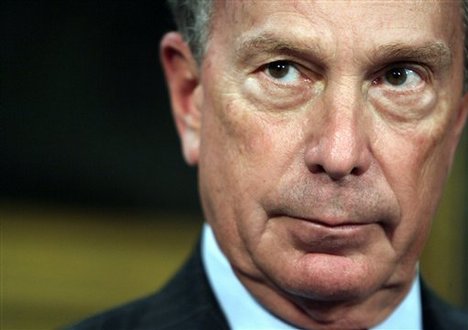 In an interview with me yesterday just after a speech before the New York State Bar Association on the issue of “tort reform,” Mayor Mike Bloomberg said that victims of New York City’s negligence should bear their own costs. “It’s just too much for us to compensate these people, we think the better policy is for those who were injured by our negligence to take care of it themselves.”

The mayor, in wide-ranging comments made in front of the lawyers group that he continued with me afterward, said, “Look, let’s be blunt here. Who is in a better position to pay the costs of an injury if a city bus injures people? Our strapped city budget, or the victims? Yes, we know that some of them can’t work, can’t take care of their kids, or even go shopping for food due to their injuries, but we have to be realistic. This is tort reform, and we need more of it here.”

In his remarks, the mayor noted the political realities of the situation: “This city has a lot of businesses in it, and if they don’t make decent profits, it won’t be a good situation. And I know all about profits, having built a pretty handsome business before the voters asked me to take this job.” “Let’s face it,” Bloomberg continued in my interview with him, “personal responsibility is so yesterday.”

OK, maybe my quotes aren’t quite exact, and I didn’t meet with him in the traditional sense so much as I channelled  his inner thoughts. But they are not far off from reality. Bloomberg actually did stand before the lawyer’s group yesterday. And he really did argue for various forms of immunity for the city for its negligence.

No real surprise there. Good food, theatre, a vibrant city life, and many other benefits for which people have been moving to cities. Factories close and workers move. Those workers are also called patients.

But Bloomberg tries to claim that this migration is actually due to medical malpractice issues. Really. He does. His exact words (Bloomberg-TortReformSpeech):

This fear of litigation drives up the cost of health care, and it can lead to a shortage of doctors in certain specialty fields – as we see Upstate. In Western New York, a recent survey found that 91 percent of emergency departments had to transfer patients to another hospital in 2009 because of lack of coverage in a necessary specialty.

Anyone here think I’m going to let him get away with that?

Let’s turn to an actual study, that was captured in this 2007 article in the New York Times (Few Young Doctors Step in as Upstate Population Ages) a different reason is presented, and it has everything to do with (surprise!) doctors moving to wealthy areas because they want to make more money and have a nice lifestyle:

In New York, the study found 6 percent growth in the number of doctors practicing medicine in the state from 2001 to 2005, for a total of about 77,000 doctors. But the way they are spread throughout the state is wildly uneven.

While newly licensed doctors flock to New York City, Long Island and Westchester County, where there is already a glut, far fewer choose to practice in the vast upstate region. For instance, during the years the study was conducted, Essex County in the Adirondacks lost 22 percent of its doctors, while there was a 19 percent increase in Nassau County, on Long Island.

And as doctors upstate retire — one-third of the physicians in Binghamton are 55 or older — recruiting replacements is becoming more difficult. “I worry that new physicians may not see certain areas in the state as viable or attractive,” Ms. Moore said.

There is little question why, since statistics show a steady exodus of jobs and a decline in prosperity in upstate New York. In the last three decades, the population drain has contributed to New York’s loss of Congressional seats, to 29 today from 39, and state figures show that the number of 20- to 34-year-olds in the region decreased by 22 percent in the 1990s.

Nice try Mr. Mayor. Perhaps you even found some folks who believed the nonsense you spouted.

He also tried out the concept of neutral medical malpractice panels to pre-screen cases. Thanks, mayor, but we already tried that in the ’80s and it was a miserable failure that led to years-long delays in cases getting resolved. (See: Why Medical Malpractice Panels Fail)

Doctors, it seems, didn’t want to take time out of their day to sit. And there were no witnesses, just records. It was therefore impossible to resolve the “patient said” / “doctor said” disputes as to facts.

He tried out the old “unfair verdicts” routine:

How can we make our tort outcomes more predictable, more equitable, and fairer? Litigation was designed to promote fairness, but today, civil litigation is more like the lottery: a few people get a windfall of cash, but most lose out.

Well, that is why we have judges that can toss out arbitrary and unfair verdicts. I’m way ahead of you on that “windfall” nonsense. See How New York Caps Personal Injury Damages.

And he trotted out the old “run it like a no-fault system” routine:

Certain classes of claims, such as those arising from cerebral palsy or birth defects, are such painful cases. And they often lead to arbitrary and unfair verdicts. Why not instead experiment with alternatives like a no-fault system where payments depend on injury, not fault? This would compensate families evenly and fairly without the expense and delays of litigation, and would remove the powerful disincentive for new doctors to become OB/GYNs.

Who said the no fault system was fair? He’s clearly never heard of sham no-fault exams by allegedly “independent” doctors that last only a few minutes and are designed with one thing only in mind from the insurance company that is paying the benefits; Find a way to cut those benefits off.

He tried out this one also: “The size of judgments, and the fact that they can be recovered even when the plaintiff is at fault, has helped drive a huge increase in tort payments.” He forgot to mention, of course, that if a plaintiff is negligent then the verdict is reduced by the same percentage amount in accordance with CPLR 1411.

But I think this was the real crux of his argument…that because the city pays a lot of money it must therefore be unfair:

Of course, the City should pay in cases where it is primarily at fault, but judgments in those cases would not amount to anywhere near the half billion dollars a year we currently pay.

This isn’t the first time I’ve heard this.  In July 2009 I systematically pulled apart a piece in Forbes that came from a fellow at the Manhattan Institute that hit this point.  If the city doesn’t compensate the victims of its negligence, of course, then that means someone else is bearing the costs. And I refer not only to the medical costs, or the economic costs from lost wages if the person works, but to the costs of the suffering involved.

By the way, Bloomberg touts Texas as a great example of tort reform, where victims get double-screwed (Do Texas Med-Mal Damage Caps Work? (What Do You Mean By “Work”?)). But  when did it become  good public policy to take those that have been injured by the negligence of others and tell them they must fend for themselves?  Is that anyone’s idea of personal responsibility?  (It’s worth noting that  doctor disciplinary proceedings in Texas have more than tripled in the last ten years, a subject I’ve written about before. Is that because bad doctors see Texas as a safe haven?)

C’mon mayor, this is like shooting fish in a barrel. Don’t you have any real arguments to make?

(The WSJ also has an article on the speech, in which I am quoted from an older blog posting: Mayor: Tort Reform Would Cut Costs)

15 thoughts on “Bloomberg: City’s Tort Victims Should Bear Own Costs”