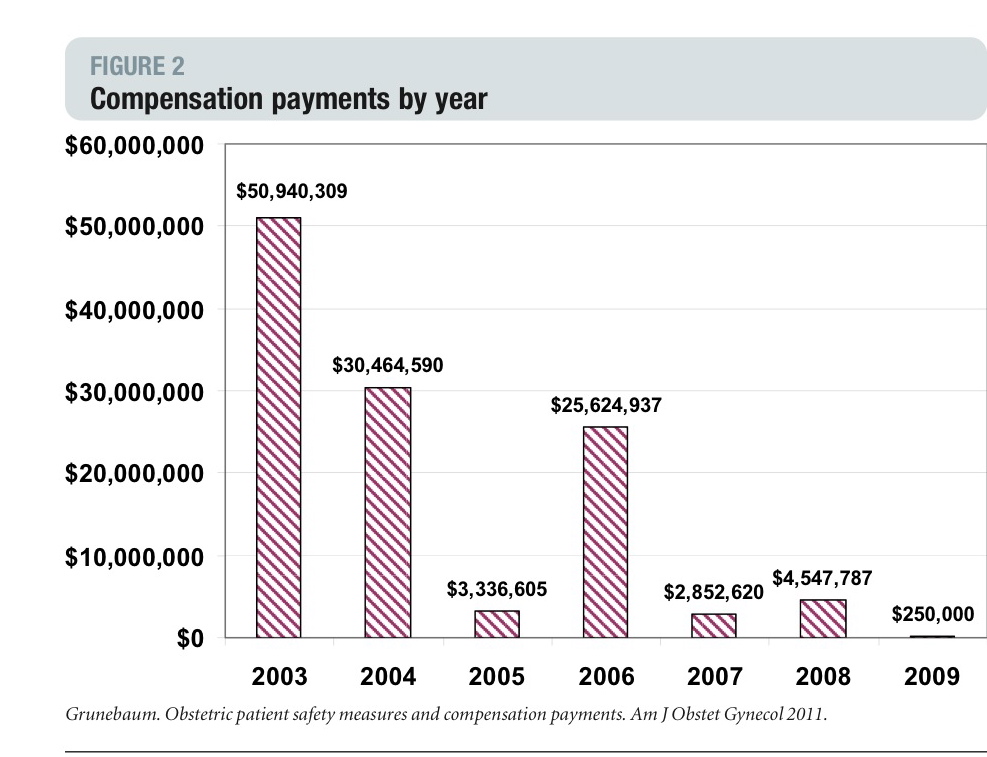 Question 1: Has medical malpractice tort “reform” ever saved a life?

Answer: No. OK, that one was easy. So-called reforms merely strip rights from the injured, they do zippo to improve medical care.

Answer: Yes. Now this question was in dispute up until recently, but no longer given a study that showed plunging medical malpractice payments and “sentinel events” after patient safety improvements were made (graph at right). But since everyone knows that histrionics aren’t my style,  an explanation as to how I come to that conclusion that tort “reform” kills is in order.

Prior medical studies had tried to address the issue of whether “reform” had an effect on increasing injury/death due to less medical care. This was a tough subject because, on one side you had “reformers” claim there was defensive medicine for fear of malpractice suits and wasted money, and on the other you had patients pointing out that doctors actually billed for, and profited from, those tests. Also, those “unnecessary” tests often found things.

So I turned to the Congressional Budget Office, which does non-partisan cost analysis of government expenditures of various budgetary changes, and found a letter to Congressman Bruce Brayley that directly addressed the issue. (On page 3, entitled The Effects of Tort Reform on Patients’ Health). The CBO opinion was inconclusive, citing  conflicting medical studies.

So why would I, faced with conflicting evidence on the issue of whether tort “reform” kills, now claim that it does?

Because the American Journal of Obstetrics and Gynecology published a study in February from Columbia Presbyterian Hosptial / Cornell Weill Medical Center that devastates the arguments of the so-called “reformers.” The study found that “instituting a comprehensive obstetric patient safety program decreased compensation payments and sentinel events resulting in immediate and significant savings.” What does that mean in dollars and cents? It means that their payments due to malpractice plunged, as the graph in the upper right hand corner shows. Quoting the report itself: “The 2009 compensation payment total constituted a 99.1% drop from the average 2003-2006 payments (from $27,591,610 to $ 250,000).” 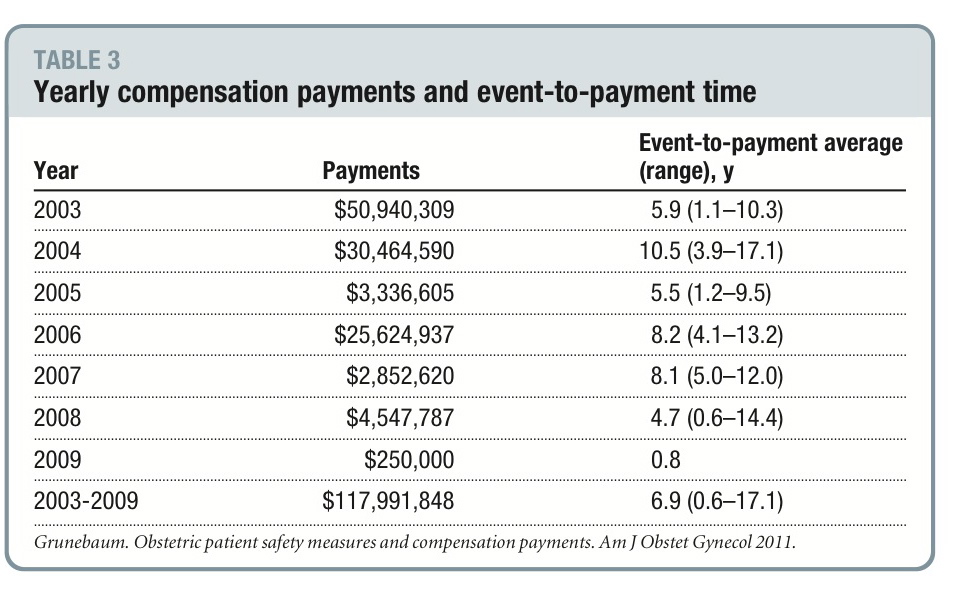 It is abundantly clear then, from a pure dollars and cents point of view, that the medical profession has a spectacular opportunity to save money by slashing its malpractice payments. But to do that, they have to improve patient safety. You can see the raw savings in the chart on the left.

Of course, if that incentive is taken away by simply giving immunities and protections to the those that committed preventable errors, which is what tort “reform” is all about, the safety improvements would not take place. That means patients will continue to be injured and die from malpractice.

Conservatives should take note, as they have long held beliefs that market forces will win the day when a better mousetrap has been built. And Columbia Presbyterian / Cornell had now devised that better mousetrap by figuring out how to keep patients safer, resulting in lower costs. Focusing on “reform” that offers protection from lawsuits instead of protection from injury/death merely perpetuates the current problems in hospitals today. Such “reforms” take away the critical incentive to improve.

So this is the two-part conclusion:

Some money quotes from the report:

Our results show that implementing a comprehensive obstetric patient safety program not only decreases severe adverse outcomes but can also have an immediate impact on compensation payments.

Our experience supports the recommen-dation that: “. . . Malpractice loss is best avoided by reduction in adverse out-comes and the development of unambiguous practice guidelines.”

Good teamwork promotes professional integrity and is essential in delivering optimal patient care, and failure in communication and teamwork is often cited as a common cause of adverse events.

Making significant changes on a labor and delivery unit including such features as the implementation of a standardized oxytocin protocol, electronic charting, team training, and improving situational awareness through a central communi- cation system, should be considered by all obstetric services. As we have shown, these changes can increase pa-tient safety, decrease sentinel events, and, as a consequence, reduce compensation payments.

The myth that medical malpractice tort “reform” was needed  has not just been deflated, but its been disproven and debunked, and it was done by one of the nation’s leading hospitals.

And why have I put the word “reform” in quotes all these years? Because the concept of reform is built about improving a system, not making it worse.

Addendum: My op-ed in The Journal News on Sunday, March 20th.