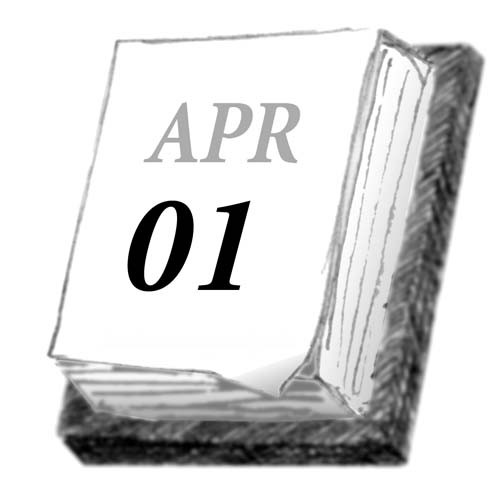 I’ve got a small problem this April Fool’s Day. Each of the last three years I’ve run a gag. I started with a decent one about the Supreme Court and fantasy baseball that nabbed a bunch of people who didn’t see it coming here, and followed up a year later with a lame one about selling this blog on eBay.

But last year, when the gag snagged the New York Times with that bit about me being appointed White House law blogger, I also learned something else; readers were actually checking in that morning to see what kind of stunt I would pull.

How early did they check in? Well, the ABA Journal ratted me out at 6:46 a.m. central time. I was lucky that the joke still had legs, thanks to all those that were in on the conspiracy and “confirming” my appointment, and that the Times didn’t find the ABA posting with a simple Google search.

But when you add in the considerable post-joke kerfuffle that took place about whether such jokes are ethical violations, that it was the subject of a Disciplinary Board comment from the Supreme Court of Pennsylvania, and then add that the joke was part of a New York Times mea culpa editorial,  it became clear to me that my days as an April Fool’s day gagster were done.

You need a well trained magician to pull a rabbit out of a hat while everyone is watching, not some guy with a law degree who got lucky a couple times when people were taken by surprise. (Though my screenwriter brother wanted me to continue my streak and write of a local strip club offering up a bikini-clad driver to lead-footed Justice Antonin Scalia, who caused a four-car wreck the other day.)

But, fear not, someplace out there on the web there are hoaxsters and pranksters of all stripes, and someplace, somewhere some folks will get gotten because they weren’t wary, or if the gag is really good enough, despite it. But it won’t be here.

Update: Incredibly, the Times got taken again (though I had nothing to do with it).