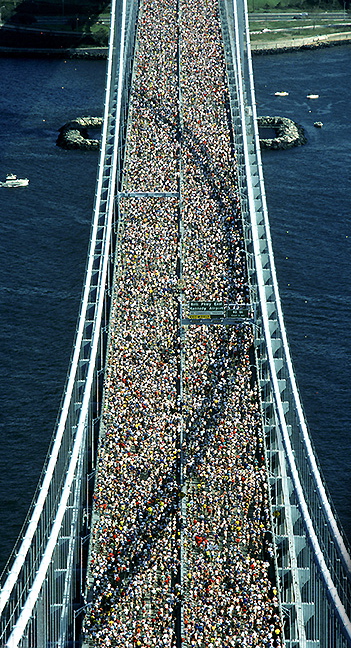 I know what you’re  thinking. How can September 11th, the NYC Marathon and vaginas be related? Trust me. They are. And it won’t take long to explain.

When the NYC Marathon was run on the first Sunday in November of  2001, the fires were still burning at the World Trade Center. Rumor and fear filled the headlines, and police reported a potential bomb plot for a bridge that week. And this marathon starts, most famously, on the Verrazano Narrows Bridge, in a staggering movement of compacted humanity familiar to even the non-runners of the world.

And you know what? Almost 24,000 people ran it anyway. And two million more lined the streets of New York. Every one exposed themselves to the potential for attack, simply so that they could participate in one of the greatest pieces of urban theatre on the planet, at the heart of the place that was just attacked. It was a great, big “up yours” to those who had hoped to alter the fabric of our freedoms.

As we ran the streets that day we saw fire engines by the side, ladders extended, with banners and firegfighters hanging off them. They cheered for us. And we for them.

But not everybody put their fears aside; in towns, parishes and cities across the land fear was palpable, though Peoria isn’t exactly a high profile target. A huge government-security complex was born, the most infamous of which is the Transportation Security Administration. The TSA has a lousy reputation. It should not surprise anyone. When you stick a tin badge on people there are a certain percentage that are incapable of tempering the exercise of the power they are given.

I have mocked them before for incompetence. As have numerous others. The TSA pat down of a 6-year-old girl was a classic. There’s the Michigan man who was forcibly patted down as he tried to explain such conduct might break the seal on his urostomy bag, and spill urine all over him, which it did.  A 24-year-old woman who’s top was pulled down by an agent in public. Lots of groping. The ACLU catalogues them, including sexual assaults by TSA agents in public.

Which brings me to vaginas. Most particularly, to Amy Alkon’s vagina. She writes the Advice Goddess blog and, oddly enough, I don’t think she’ll mind me writing about it. Because she already has.

You see Alkon shares the sensibilities of many who believe we, as a nation, over-reacted to the September 11 attack by overly restricting our rights, handing our freedoms to extremists. So at an airport she declined to go through the scanner that allows the TSA to look at your naked image.

And guess what? TSA agent Thedala Magee was, according to Alkon, not amused that someone would show disrespect for her authority and decline the invitation to be scanned. I’ll let Alkon tell her story from here:

Basically, I felt it important to make a spectacle of what they are doing to us, to make it uncomfortable for them to violate us and our rights, so I let the tears come. In fact, I sobbed my guts out. Loudly. Very loudly. The entire time the woman was searching me.

Nearing the end of this violation, I sobbed even louder as the woman, FOUR TIMES, stuck the side of her gloved hand INTO my vagina, through my pants. Between my labia. She really got up there. Four times. Back right and left, and front right and left. In my vagina. Between my labia. I was shocked — utterly unprepared for how she got the side of her hand up there. It was government-sanctioned sexual assault.

Upon leaving, still sobbing, I yelled to the woman, “YOU RAPED ME.” And I took her name to see if I could file sexual assault charges on my return. This woman, and all of those who support this system deserve no less than this sort of unpleasant experience, and from all of us.

And if you think that’s bad, don’t worry. It actually gets worse. Realizing a lawsuit against the TSA would likely go nowhere, Alkon did the next best thing. She published it; e-shaming the TSA and the worker she said assaulted her. Because if TSA workers know they might be humiliated on the web after humiliating a passenger, perhaps some would think twice about abusing that tin badge.

Now this is where it gets ugly, because Thedala Magee, the TSA agent at issue, apparently decided that the best defense is a good offense. Big mistake. She hired a lawyer to threaten Alkon. How stupid is that? Well, the answer is, not nearly as stupid as the lawyer, Vicki Roberts of Santa Monica California, who proceeded to write a letter to Alkon demanding she pay her Magee $500,000. In her letter, published on TechDirt, Roberts somehow thought it would be smart to up the ante and subject her client to national infamy, as opposed to local infamy.

Alkon, in turn, hired First Amendment honcho Marc Randazza who promptly told Magee and Roberts to go shit in a hat and pull it down over their ears, though he was actually even more colorful than that. I don’t want to quote the letter. I want you to read it. It doesn’t take long and it’s well worth the time if you have even a tiny care about liberty. (And when you read that letter, you’ll understand why I want Randazza to be my lawyer.)

So why post this story on the 10th anniversary of the attack? Because it’s not enough that we stay vigilant with respect to potential terror attacks by outsiders, for we must also stay vigilant to civil liberties attacks from those who live here. Perhaps those outside New York City should be watching what those in the city do when they consider stripping down the Bill of Rights and subjecting people to unreasonable searches and seizures.

This weekend New York was on a  high terror alert. What did I do? Yesterday I took my kids to a big crowded area in New York City; we went to see the Mets play at Citi Field, which shares subway and parking lots with the on-going US Open. I would no sooner stay home from that arena than I would from that marathon I ran 10 years ago. Today will be spent with family also, but not in front of the television. Which, my friends, is as it should be.

Complain About Being Sexually Assaulted By A TSA Thug? THEY’LL SUE! (Popehat)

Two Minutes of Terrorist Triumph: Alone With the TSA (Elie Mystal @ Above the Law)

3 thoughts on “September 11. The NYC Marathon. And Vaginas. (Yes, they are related)”