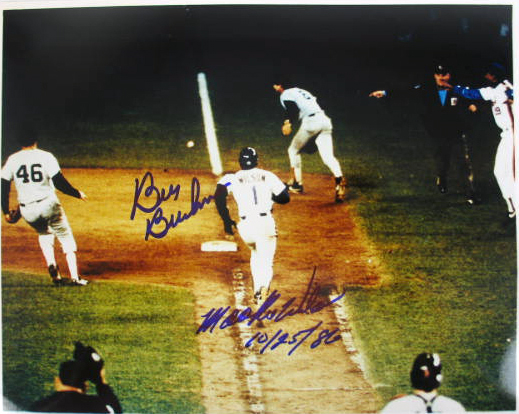 Mookie Wilson races to first as the ball gets past Bill Buckner in the bottom of the 10th, Game 6, 1986 World Series.

On the Mets opening day this year, I did an interview with Mike Sergio, who parachuted out of the Queens sky to land in Shea Stadium during a ballgame. Not just any ballgame, though, as this was the start, quite fortuitously, of one of the most famous games in baseball history .

Today is the 25th anniversary of Game 6 of the 1986 World Series, between the Mets and Red Sox. The Sox were up 3 games to 2, and this game was tied and went into extra innings. The Sox scored two in the top of the 10th and were one out from winning the championship. Then all hell broke loose:

Wild pitch by Bob Stanley, off the glove of catcher Rich Gedman (Mitchell scores to tie the game, Knight to second)

Mookie Wilson slow roller up the line, through the legs of first basemen Bill Buckner (Knight scores from second)

This is a 3 minute clip by Major League Baseball of that most famous inning, which I watched from the upper deck of the stadium. (I had to sneak in, as management gave almost all the tickets to season ticket holders and league people. I’m confident the statute of limitations has now run on my transgression.)

Enjoy the clip. (Unless, of course, you are from Boston, in which case  you should be reading something else.)

(And if you want to buy the ball, it is being sold today on eBay with a starting bid of $1,000,000, with the auction ending at the precise time Wilson hit his slow roller down the line.)