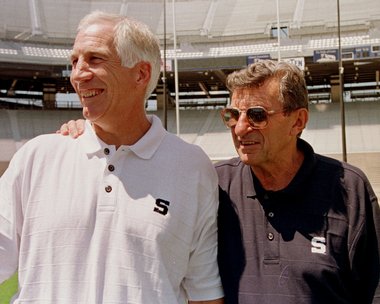 Out of Florida comes a $100M verdict against a priest for sexual abuse of a child. Of that, $90M is punitive damages. Will that money ever be collected? No. Does it matter?

It certainly matters if you are Penn State, reeling from news this week that Jerry Sandusky, one of its football coaches, was arrested on multiple counts of sexual assaults on children. There seems to be little point recounting the burgeoning scandal and its awful claims here, as so many others are already doing, and I try not to write “me too” kinds of posts. But you would have to be living under a rock not to know that legendary head coach Joe Paterno was fired in the immediate aftermath, as was the school’s president, Graham Spanier.

But one day you can bet some of these victims — and no one knows how many will claim to be — will come forward and sue the school for not doing more to bar Sandusky from the school grounds and alert the police after finding out about the allegations.

Even if Sandusky were to prevail on the criminal charges — a concept few bother to talk about as everyone just assumes he is guilty — it seems unlikely that those saying they were victimized would just fade away. and it seems that one day a jury, or many juries, will be asked to answer questions similar to this:

Was Penn State negligent in failing to report Jerry Sandusky to the police?

Was that negligence a substantial cause of injury to this victim?

Did Penn State act with a reckless disregard for the health, safety and well-being of those on campus by failing to report Sandusky to the police?

So that Florida verdict against a priest is important, as it is one barometer of how society feels about these types of issues. And that means bad, bad news for Penn State, for many years to come.