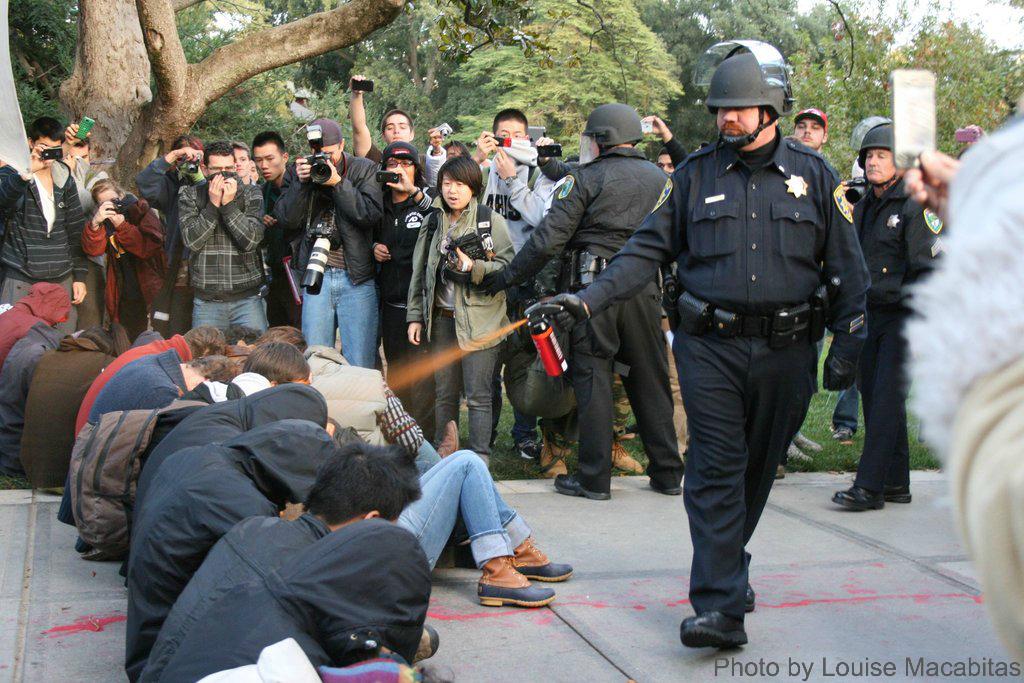 When I saw the photo at right, my eyes almost popped out of my head. The scene is from one of the many Occupy protests that have sprung up out of Occupy Wall Street, this one at the campus of UC Davis. The cop pepper spraying the peaceful, sitting protestors yesterday is reported to be  Lt. John Pike of the UC Davis police. If he hasn’t been fired yet, the question to ask is “why?”

And, before I go any further, yes, there is video. You can see in the background all the cameras out there. This is one of the videos from YouTube, and you can be sure many more will come up. Much will be written on this.

It matters not one lick whether you agree or not with the Occupy protests. We have the First Amendment and people are allowed to protest to their heart’s content. And if they were tresspassing or peacefully violating some ordinance, well, the cops have had decades of practice with how to peacefully arrest people. 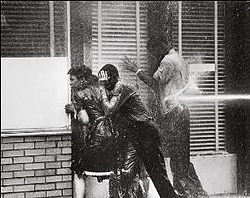 High school students get fire hosed in 1963 in Birmingham

The appalling conduct of Lt. John Pike reminds me of another iconic image from another era. And this is when the police turned the fire hoses on the peaceful civil rights protestors of Birmingham.

There must be accountability. The job of the police is to protect us from goons, not be the goons.

The United States has a long history of advocating for human rights around the globe. Had we seen  this image come out of Iran, we would have howled in protest.

Some of us have been accustomed to watching police videos of people getting beaten. It started with Rodney King, and has accelerated in recent years with the ubiquity of the cell phone camera as well as cop car cameras. You can see many such videos of police abusing people displayed and discussed by people such as Scott Greenfield or  Radley Balko.

But this one is so striking given its brazenness. This didn’t happen in a back alley, or at night, or someplace where the cop thought he could tell any story he wanted to justify his conduct. No. This happened because the cop actually thought he was entitled to assault peaceful protesters.

The unprovoked assault by Lt. Pike raises many questions, but the most immediate ones have to do with making sure he is stripped of his badge and gun and fired from the force. When the press release comes out, it should not say that he was “let go” or “dismissed” or any other kind of namby pamby euphemism. It should say he was fired.

And if he is not fired by his immediate supervisor right away, that person should be fired for not doing it. There are no excuses for allowing a thug to remain on a police force. Then he must be prosecuted. There are no excuses for a failure to prosecute. And when he is convicted, as surely me must be for such a naked assault, he should be jailed.

And yes, there should be an investigation. Because it is critical to know if Pike is a lone wolf goon or if he was directed by others to commit his assault. Accountability. All the way up the line. This is not about Occupy and it is not about student and it is not about California. It is about the rights of the citizenry.

Once upon a time, I had an office in the Woolworth Building downtown, overlooking Broadway and City Hall Park. And from my perch on the 8th floor, I would routinely hear protests down in the street and park below. Sometimes it made it hard to work, but it was nevertheless music to my ears. This was the mighty First Amendment in action, and I loved regardless of whether I agreed with the points of view being chanted toward the the mayor or not.

A couple other thoughts, since it is my understanding that some of the victims have been hospitalized. Every one of them should be getting an immediate visit from the Governor and an immediate apology, if that has not already happened.

Unless there is some immunity that I don’t know about, Lt. Pike will be sued as will his employers, which I assume is the state. As they should be. There needs to be accountability. Both criminal and civil.

One final visual for you. This one comes to me courtesy of Wisconsin Court of Appeals Judge Ralph Adam Fine who saw me tweet this subject earlier today (and a former guest blogger here). He sent me this image of a mural in the library of the Justice Department, where he used to work in the 60s.

The mural is by John Steuart Curry, portraying a terrified man on the courthouse steps. A judge stands between the man and a lynch mob; the man at the front of the mob holds a rope; a raging flame burns in the background (story on the murals here).

The job of the justice system is to protect society from the mobs. And when the mob turns out to be the police, the system of justice must not cower.

Update, August 1, 2012: Nine months after this incident, Pike has finally been fired.