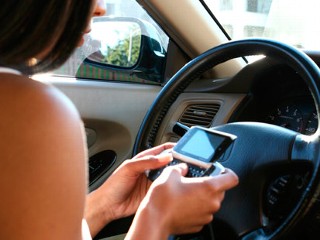 Today’s post is a two-parter, this representing a debate between two New York attorneys over a recent case in the news: Suit was brought regarding a car accident and the plaintiff sued the person repeatedly texting the driver, claiming that she should be held to be partly responsible for distracting the driver. The texter was not in the car. The novel case was tossed last week by a New Jersey court.

Stealing a page from 60 Minutes’ old Point/Counterpoint, and the delightful send-up of that show on Saturday Night Live (Jane, you ignorant slut…), we hear first from Ray Mollica. Mark Bower responds in the second post:

When I heard about “Skippy” Weinstein’s lawsuit which sought to pin liability against a young woman on the basis that she had sent text messages to her boyfriend while he was driving, and thus contributed to the cause of what was a horrific accident, I did a mental version of the facepalm.  I immediately felt this was frivolous litigation and no good could come of it.

As the day went on, and discussions and comments with colleagues were had, it turned out that many in our profession did not agree with me, or at the very least, thought we should give a lawyer named “Skippy” the benefit of the doubt, as he was just doing his best for two clients who each lost a leg.  Well, being who I am, I respectfully still believe I am right.  Check that; I know I am, and my reasoning is fourfold, beginning with the more practical and moving outward to somewhat esoteric.

Initially, my thoughts went back to first year law school, and the elements of a tort: Duty, Breach of Duty, Actual Cause, Proximate Cause, Injury.  Well, in this case we know of the actual cause: a car striking two very unfortunate persons on a motorcycle; and the proximate cause: the driver of the automobile being careless enough to distract himself by looking at a text message on a phone.  The duty?  Well, the only duties involved were those related to the driving of a motor vehicle.  However, there was never any duty on the part of the texter.  Rather, there is no duty recognized anywhere for a person sending a text, so therefore there can never be a breach of a nonexistent duty.

Next, my thoughts turn to the idea that should this theory be upheld by a malleable jurist, it would set the motor vehicle litigation industry partially on its ear.  Without wanting to sound alarmist, it occurred to me that much energy would be devoted both pre and post-suit into finding out who, if anyone had texted or phoned the defendant driver at any time vaguely contemporaneous to the subject accident so that this person [persons?] could then be added as either direct or third-party defendants.  Knowing that my adversaries had third-partied people with only the most tenuous theoretical liability [the driver of the car that was rear-ended at the stop light] it was no long stretch it was a near certainty to come to pass.

Furthermore, considering the often [though not always] overreaching blanket demands for cell phone and social media records, now it would appear that cell phone records would have to turned tuned over, including text messages, as a matter of and now under the rubric of “material and essential for the defense.”  In this day and age of smartphones, this would include emails – emails that some might not want disclosed for a myriad of reasons, including attorney client privilege.

This moves me to the next point: for many reasons the public hold us in relatively low regard.  As the old joke goes: “What do you call 500 lawyers on the bottom of the ocean?  A good start.”

As people who sent texts to drivers  – whether they had a reasonable belief that the person was driving and therefore liable will only be answered by litigation – involved in an accident are more and more drawn into lawsuits for reasons they will not find clever, or appreciate the attorney’s out-of-box thought processes, the status of our chosen business will become inexorably lower.  They will hate us all the more, these jurors of ours, these voters being asked to support tort litigation reform.  It would be terrible publicity, and “Skippy” Weinstein’s case already has been.

In the realm of public relations the “Trial Lawyers” are always fighting an uphill battle, and Mr. Weinstein and his 15 minutes just made the slope a few degrees steeper.  This is just more ammunition to use against the plaintiff’s bar in a world where reading the comments section to an article relating the horrible story of a child killed by a mechanical rolling gate can make a practicing attorney nauseous.

Rather, it behooves attorneys to occasionally take a step back and look at the big picture.  And the big picture is that while Mr. Weinstein was creative in trying to help his own grievously injured clients, it was bad for the rest of us as it made that many more people say “look at these lawyers!” and shake their fists at the sky in disgust.

Finally, as personal communication technology has exploded in the last decade, so has the attempts of the insurance industry to invade the spheres of cell phones and social media.  I am of the opinion that we are rapidly creating a private [as opposed to governmental] “Big Brother” with companies seeking the authorization to access, read and download facebook pages, email, cell phone records and now text messages.  Whenever a defense attorney asks my client if they have a facebook account, or I get a demand for some similar type of disclosure, I can’t help but ask myself if this is the world we want to live in.  So I ask: is this the world we want to live in?  Where every text is potentially an actionable deed?  Will people in the future have to report their teenagers average daily texting for their homeowner’s policy?

As of this writing I have learned that the Morris County Superior Court Judge David Rand granted summary judgment dismissing the negligent texting claim. But the cat is out of the bag.  There will surely be another case with very specific fact, and some other practitioner will do their damnedest to think out of the box, and differentiate his case from Mr. Weinstein’s, and we’ll be here all over again.

5 thoughts on “Can There Be Liability When Sending Texts To A Driver? Pt. 1 (Point/Counterpoint)”