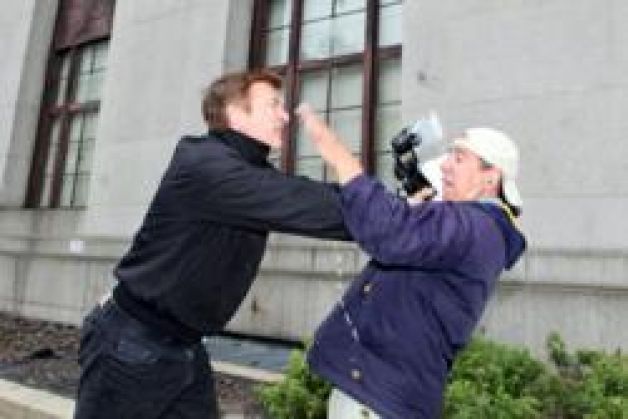 The other day Alec Baldwin was in a bit of a fracas here in New York. Seems he wanted to go get a marriage license and the paparazzi swarmed around him. This led to pushing and shoving and Baldwin quite possibly slugging one of them, Marcus Santos. Quite predictably, there were good pictures for the photographers that instigated the incident and headlines. They succeeded in creating news.

So if one of the photographers gets slugged, can s/he successfully sue Baldwin?

To appreciate whether the slugee is really a victim, we turn first to Scott Greenfield at Simple Justice for a rundown on how this all works in his Paparazzi Primer:

Photographers standing with their back to the courthouse door, making it impossible for you to reach the handle, open the door and enter, without pushing them out of the way. And they won’t move, but just keep snapping pictures. And they won’t be pushed gently, but will stand their ground…

Photographers creating a phalanx into which a person walks to get to the place he needs to be, which then closes in around him and stops, making it impossible for the person to move, whether forward or even backward. They will not move, and leave the person no choice but to stand there or push his way through….

He has much more, and terrific video of the press swarming and shoving Bernie Madoff to get pictures.

So here is my analysis: The most basic instinct in the animal kingdom is that of survival. When cornered, an animal has the choice of fight or flight. If the cornered animal is a human, and the cornering animal is a photographer, then either reaction will make for great pictures and the fabrication of news.

But it seems impossible to me to blame the cornered animal for doing what comes naturally…protecting himself. If a celebrity lashes out at a swarm that has cornered him (or her) that reaction falls well within the orbit of animal instinct to survive.

So, it may be the job of the paparazzi to act like a-holes because that is how they get their pictures and pay their mortgages. But they have no cause to complain when the cornered animal predictably and instinctively reacts.

If you’re looking for a lawyer Mr. Santos, don’t call me.