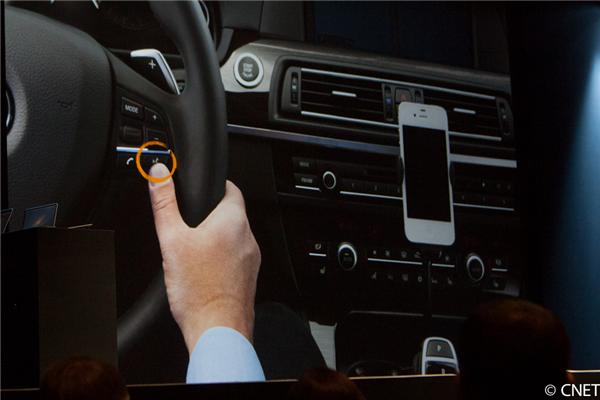 Two movements are rapidly coming together and will go head-to-head in the coming years:

First is the push to ban driving while on a cell phone — even if it’s a hands-free device. This is due to so many accidents occurring from distracted driving. There are 10 states that already ban it. The problem is not with drivers taking their eyes off the road, but a failure to concentrate. The National Highway Transportation Board wants to ban it in all 50 states.  A sample story is here, that includes some data:

According to the National Highway Transportation Safety Administration, more than 3,000 persons died in 2010 because of distraction-related accidents, National Transportation Safety Board Chairman Deborah Hersman said last December in calling for a 50-state total ban on the use of cell phones and other portable electronic devices. “It’s time to stand up for safety by turning off electronic devices when driving.”

Now contrast this to the rapid movement of technology, with Apple at the forefront. Just days ago they announced that they were ditching Google maps in favor of their own, and that these would be incorporated into future cars, including BMW, General Motors, Toyota, Mercedes-Benz, Honda, and Audi.

What does that mean? It means that drivers will be able to use Apple’s Siri voice system to input destinations, and Siri will respond without the need to punch in data. From CNET on the announcement:

The new button should be a welcome change for drivers who are used to manually entering their destinations into a GPS, or laboring through complicated voice-activated menu trees to perform simple tasks, like changing the radio station or placing a phone call. By leveraging Siri’s natural language voice control platform, theoretically drivers will be able to keep their hands on the wheel and their eyes on the road to minimize distracted driving.

With Apple integrated into the car, it seems likely that such devices would also include the music that people have on their iPods/iPhones, as well as the ability to use those phones. One need not be a genius to foresee Apple integrating maps, music and phones into one device in the car, and allowing a simple wireless sync either with the handheld device that remains in your pocket or with its cloud based service.  Texting and emailing could be voice-activated.

This means a dramatic rise in driver activity, for what would likely be an extremely popular device. So the future, it seems, is likely to see significant increases in drivers interacting with electronics, albeit it in a safer way than in the past. No one, for instance, will need to take their eyes off the road to punch buttons on radios.

Looking into my crystal ball I see more accidents, of the rear-end I-wasn’t-paying-attention type. As opposed to those that took their eyes off the road and swerved into another lane as they spun the radio dial.

How legislatures (and the National Transportation Safety Board) deal with this remains to be seen, but I would expect vigorous debate to continue that focuses on the issues of the role of government and consumer safety.

6 thoughts on “Apple, Siri, Distracted Driving and the Future of the Automobile”