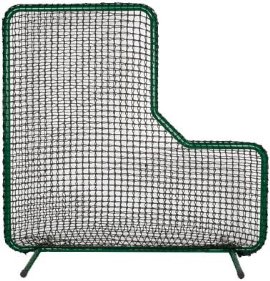 Your basic L-Screen, which looks like the one described in the opinion

The Second Department yesterday reinstated a case where a 14-year-old was pitching batting practice and was hit in the face with a line drive. The case had originally been a defense verdict at trial. As you read, try to figure out whether this was a question of fact for a jury or an issue of law for the court.

Before hitting the facts of Weinberger v. Solomon Schecter, this is the basic law in New York on primary  assumption of risk, the rule that says you can’t successfully sue someone if injured in an athletic pursuit:

Pursuant to the doctrine of primary assumption of risk, a voluntary participant in a sporting or recreational activity  consents to those commonly appreciated risks which are inherent in and arise out of the nature of the sport generally and flow from such participation…If the risks of the activity are fully comprehended or perfectly obvious, plaintiff has consented to them and defendant has performed its duty.

OK, with that nugget in your back pocket we can look at the facts.

A 14-year-old high school freshman with limited pitching experience was throwing batting practice from several feet in front of the very muddy mound area. The L-screen that was supposed to be used, and was supposed to be free standing, was busted. It was propped up between benches, but kept toppling over.

After it fell over one last time, the teen kept pitching without the screen being used.  Why? There was mixed testimony at trial as to whether the coach told the kid to keep pitching (two non-party witnesses and the injured youth) or asked the kid if she was OK to keep pitching (the coach).

Does the doctrine of assumption of risk come into play here when the line drive slams into this young woman’s face? A bit more on the law…

the primary assumption of risk doctrine does not serve as a bar to liability if the risk is unassumed, concealed, or unreasonably increased. Awareness of risk is not to be determined in a vacuum. It is, rather, to be assessed against the background of the skill and experience of the particular plaintiff.

Wrong move, said the appellate court. This is a matter of law for the court, and these circumstances didn’t warrant such a finding or such a charge to the jury. The court reasoned that:

The faulty equipment provided by the School and the decreased distance between S. and the batter, from which she was pitching at the direction of [the coach] without the benefit of the L-screen, did not represent risks that were inherent in the sport of softball and, instead, enhanced the risk of being struck by a line drive.

And so the case was sent back for a new trial.

Does this mean the young lady will win? No, it doesn’t. The jury will still get to assess whether she was comparatively negligent in the accident, and that would reduce any potential verdict if such a finding is made.

This is an interesting decision and analysis for any sports related injury. While the inclination of most practitioners is to simply reject such cases outright, there are sometimes certain circumstances that will make you stop and say, wait, that isn’t a commonly accepted risk.

A few other assumption of risk pieces I have, simply because the sports-related injury is interesting:

Reach the Beach Relay (And Assumption of Risk)

The Wife, The Tushy Bone and The Waterpark (Assumption of Risk, or Not?)