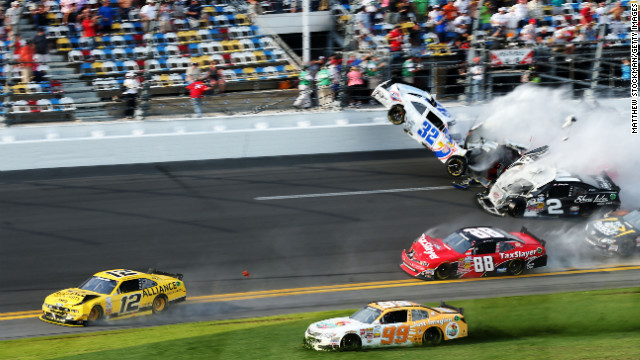 Kyle Larson’s car heads up into the fence. Photo via CNN

I was minding my own business Sunday, reading about the huge crash at the Daytona Speedway, and the dozens of people injured, when this quote jumped off the CNN page at me from one of the involved drivers, Brad Keselowski:

“As drivers, we assume the risk. But fans do not.”

Really? Don’t be so sure.

As a backdrop, you may want to look at this video shot from the stands where the debris flew through and over the retaining fence and into the crowd after Kyle Larson‘s car hit it and the front end disintegrated. A tire can be seen just one row back and three seats over from the cameraman, with at least one injured spectator on the ground and fans frantically waiving for medical assistance.

Since this crash took place in Florida, and I’m not licensed there, I’ll hit upon the issues that will be raised, leaving an ultimate determination as to how Florida law will handle the questions to others.

First, as a general proposition — and I’m using New York law here since that is what I’m familiar with but concepts will be the similar elsewhere — we look at what primary assumption of risk actually is, and how it confers complete protection against lawsuits for injuries from an event: It is:

a voluntary participant in a sporting or recreational activity  consents to those commonly appreciated risks which are inherent in and arise out of the nature of the sport generally and flow from such participation…If the risks of the activity are fully comprehended or perfectly obvious, plaintiff has consented to them and defendant has performed its duty.

Lawyers see cases like this – or at least attempts at cases like this — usually with foul balls in baseball and hockey pucks flying into the stands. It is not just the players on the field that are subject to the concept. We see it sometimes also with golf and with racing. You can read from two law review articles on the broad subject: Here and here. 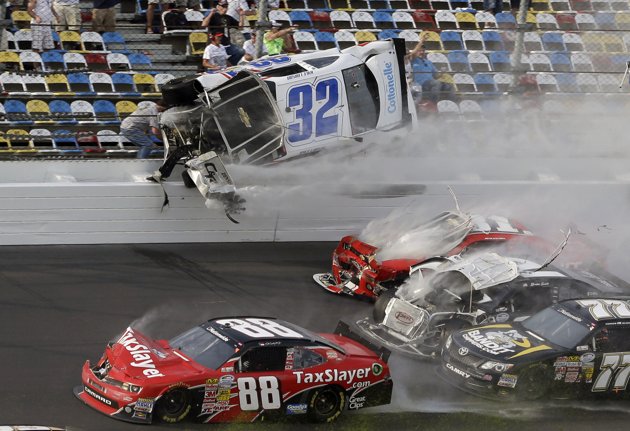 So here is the question: Is injury due to debris flying into the stands an obvious risk of sitting near the race track?

The answer, I think, must be yes. According to this 2002 article from the St. Petersburg Times, “Since 1990, 29 racing spectators have been killed by cars or flying parts, and another 70 have been injured.”

Those dangers are the reasons why a retaining fence has been placed at race tracks, a fence placed behind home plate for foul balls, and glass placed around the boards of hockey rinks. But still things get past, as owners of the events weigh the risks/benefits of putting these security features in place, which also happen to partially obstruct views of the event.

Some questions that the Florida lawyers will no doubt be asking:

1. Did the existence of the fence remove the obvious risk? This would be similar, I think, to a shard of broken baseball bat slipping through the fence behind home plate. Will there be different articles for small debris that flew through the fence as opposed to a tire that flew over it?

2.  If the injured spectator was a minor that was unable to appreciate the risks of car parts flying into the stands, would that youth be able to proceed?

3.  Are any of the people involved in the crash, or the makers of the car, responsible for causing the accident?

4.  Would the disclaimer on the back of the ticket serve as notice to participants that they might be injured? It is very general:

“The holder of this ticket expressly assumes all risk incident to the event, whether occurring prior to, during or subsequent to the actual event, and agrees that all participants, sanctioning bodies, and all employees, agents, officers, and directors of Daytona International Speedway, its affiliates and subsidiaries, are hereby released from any and all claims arising from the event, including claims of negligence.”

If this was New York, my guess is that, if push came to shove, that a potential suit against the track would fail.

Of course, not all suits fail. It is’t only the track that might be a defendant. In one Florida suit resulting from a race track accident with debris sailing over the fence:

A Citrus County man and father of three, Lake Wilson, suffered a major head injury in 1990, when the hood of a race car at Citrus County Speedway sailed over a fence and struck him full force. Wilson was in a coma for 10 months, emerging brain damaged. He won a settlement of $2.7-million — not from the speedway, but the company that distributed the pins that failed to hold the car hood in place.

If any Florida lawyers want to take a crack at this in the comments, be my guest…

11 thoughts on “Daytona Crash, Spectator Injuries and Assumption of Risk”