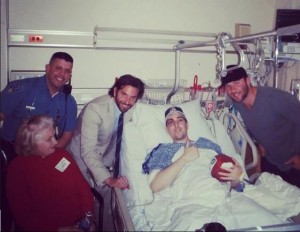 Jeff Bauman in the hospital after the Boston Marathon bombing

Jeff Bauman is in the picture to the right. He is in the news right now because he had the great misfortune of being near one of the Boston Marathon bombs.

In the picture Bauman is smiling and giving a thumb’s up. He is also missing both of his legs. Actor Bradley Cooper is to the left and New England Patriots wide receiver Julian Edelman (who tweeted the picture) is to the right.

As soon as he woke up in the hospital, he asked for pen and paper to write that he saw the bomber and then went on to help the FBI.

I bring this smile photo up today because, over the years, I’ve covered several rulings by courts that deal with defense attorneys asking to fish through the Facebook and other social media sites of plaintiffs. They ask to fish because the plaintiff is smiling in a photo and claim that the smile is inconsistent with suffering.

Here are two examples: In Davids v. Novartis,  drug-maker Novartis went fishing on the basis of a smile in a photograph and Magistrate Judge Williams D. Wall slapped it down, writing, “is not clear to the court, one picture of Plaintiff smiling does not contradict her claim of suffering, nor is it sufficient evidence to warrant a further search into Plaintiff’s account.”

By contrast, a Suffolk County judge permitted access to Facebook based on the same theory, writing in Romano v. Steelcase:

In this regard, it appears that plaintiff’s public profile page on Facebook shows her smiling happily in a photograph outside the confines of her home despite her claim that she has sustained permanent injuries and is largely confined to her house and bed. (see also, in contrast,  Eric Goldman’s commentary on the Romano photo)

Perhaps future courts will take note of the picture of Bauman, with a smile and a thumb’s up, to note that a smile in a snapshot does not magically mean everything is well.

As Bauman makes abundantly clear in this picture, people can smile for a multitude of reasons. It may be because they are happy to be alive. Or because someone said something humorous, even at a funeral. Or simply because of instinct when someone lifts a camera and hollers, “Say cheese.” 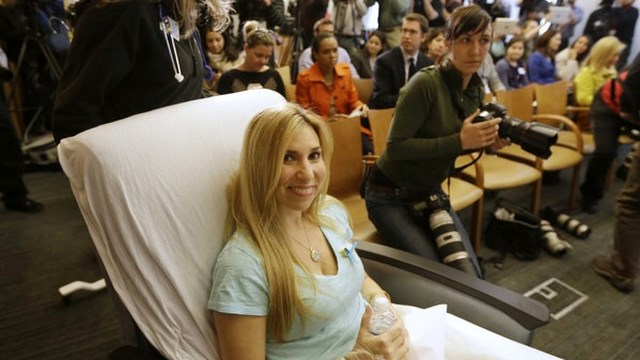 Updated (4/26/13) – Another smile, this time from bombing victim Heather Abbott. One week after the bombing, she had her leg amputated. Prior attempts to surgically repair the leg had failed.

Three days after the amputation she appeared at a press conference. And smiled. You can see her expression here.

A smile may mean many things.

Updated June 24, 2013: People Magazine ran a cover photo in its June 11, 2013 edition — three amputees, three brave smiles. If a defendant tries to claim a smile in a photograph means the person isn’t injured, just show them this cover. 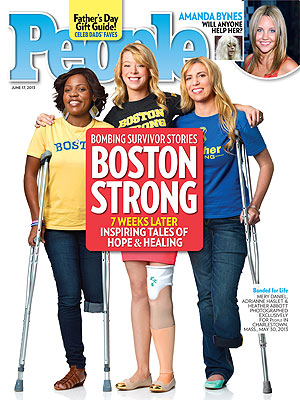