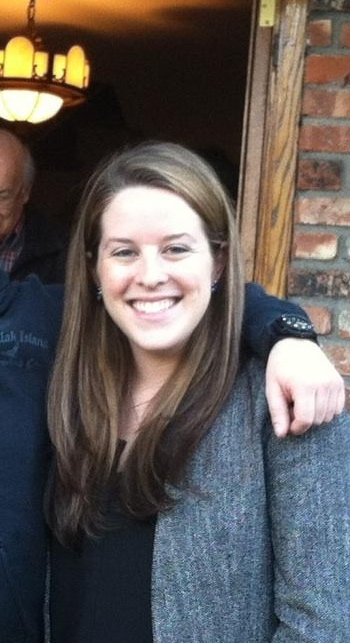 Ellen decides to crop her brother out of the shot.

When I got the notice to serve jury duty a few months ago, I was really excited– As a Law and Order fan, I had visions of courthouse showdowns and action packed trials.

I woke up on Thursday morning in the midst of a pretty terrible cold. I trekked to the courthouse and found a line of 40 people deep waiting to get in… in the pouring rain. The security team working the x-ray machines were moving at a glacial speed, barking orders at those trying to pile into the building to avoid the downpour outside.

Once I was seated in the “jury duty holding pen,” I awaited instructions from the clerk monitoring the room. You think your job is a snooze? Can you imagine telling a group of frustrated, wet and cold people over and over again that they needed to sit and wait until their name was called? To be fair, the clerk did crack a few jokes attempting to make the situation a little less dull.

By far the most interesting part the experience was watching other people and their reactions to the clerks’ instructions. “New York City has no one day trials. If you get chosen, you will be on trial for more than a week. If this is a problem, go to the other courthouse to reschedule your date,” he says.

Cue groans and eye rolls. About 20 people stand up and shuffle back into the rain. “You cannot serve if you don’t speak English.” About 10 more people get up and leave ( my question? How did they understand that last sentence if they don’t speak English?)

“You cannot serve if you are a convicted felon” comes his next line. At this point everyone giggles and looks around to see who will stand. Sure enough, about 10 more people get up, including the Burberry clad girl next me. Humm… makes you wonder.

In the midst of the clerks’ instructions, people kept going up to his desk to ask him questions. I was silently sceaming at them to sit down and wait for the clerk to finish his speech– I couldn’t believe that people thought it was okay to interrupt him mid sentence to ask a personal question!

Around 10:15 the clerk received the first case. He began to call out the names of selected jurors, but mine was never called. I was bummed. I was looking forward to hearing a case and living out my Law and Order dreams. He told us to sit tight and he would let us know when the next case came in.  Around 12:30, we were given a two hour lunch break and told to return at 2:15. The fun part of jury duty had begun!

When we returned from lunch, the clerk repeated his instructions to be patient and wait for the next case. Out came the books, laptops and newspapers. At 2:45 the clerk announced that there would be no more cases that day and we were free to go… until the next day. I was at a loss of what to do with myself! Who gets out of work before 3pm?!

When I woke up Friday morning with an even worse cold, my first thought was “can I call sick to jury duty? Who pays my salary if I do? Will I have to go back next month to repeat this tedious process?” I dragged myself down the court house, waited in the pouring rain (again) to go through security, and took my seat in the waiting room. The clerk told us no new cases had come in yet that day and he would update us later.

As I battled my runny nose I noticed one very important thing- There were no tissues! You would think that the city of New York could spring for some Kleenex if they were going to hold us hostage for the day. Thankfully, at 12:15 the clerk announced that NYC was so safe that there would be no more cases that day and we were free to go (for the next 6 years!).

While I was slightly disappointed that I never got to hear a case, my desire for a nap and some dayquil overpowered everything else.

Do I feel like a made a difference in the justice system? Not really. But it was an interesting two days of people watching and I have offically completed my civic duty for the next 6 years.

One thought on “Another Turkewitz Sits Jury Duty”