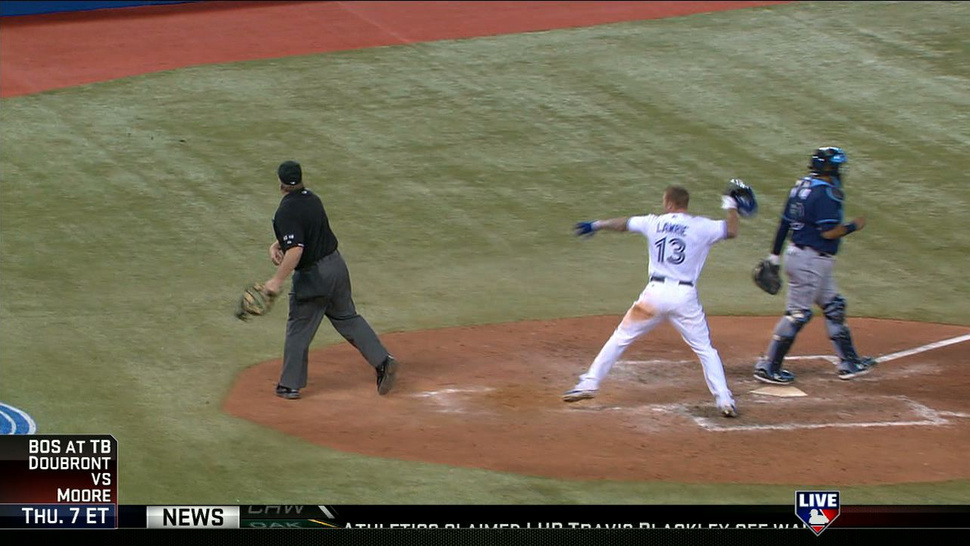 An unhappy Brett Lawrie of the Toronto Blue Jays throws his helmet in 2013.

Headlines make a difference, as headlines can skew the viewpoint of the reader before the facts are even read in the article. That is, if the article is even read. Many folks, of course, just skim.

And so it is with KCRA in Sacramento, CA.

The problem? That isn’t really why anyone was sued. An actual reading of the article reveals that the defendant, a 14-year-old, threw off his helmet as he raced home with a winning run. But the helmet hit the coach and caused a torn Achilles tendon.

The kid, in other words, wasn’t sued because for celebrating, but for causing an injury to his coach.

As per the article’s actual text:

Whether the underlying facts support the suit or not, I have no way of knowing. All we have now is a legal pleading and a short news story.

Will it be tossed out on assumption of risk grounds? Perhaps. Throwing helmets isn’t exactly part of the game, but as you can see from the graphic above of Brett Lawrie throwing his helmet in 2013, it does happen on occasion.

But one thing is clear. The headline writer didn’t accurately tell you what the story was about.

Does this matter? You bet. Because headlines like this help to shape public opinion, and that public opinion affects how potential jurors will feel about cases before a trial even starts.

Update (1/16/14):  CNN now has the story, with interviews with the parents of the kid being sued, bemoaning the suit, and the coach who brought the suit discussing his Achilles injury from a 6-foot tall, 180 pound kid, and the lack of apology. CNN harps on the amount sued for: $500,000. And that makes this a good time to remember that ad damnum clauses such as this are a very bad idea. They have, thankfully, been outlawed in New York.

The coach that sued says “it’s not about the money,” but the fact that there is a number in the complaint for the media to focus on takes that issue out of his hands.

While I don’t know if this suit will survive due to assumption of risk issues — and if California law is the same as New York law I think it will get tossed — it’s clear that the CNN focus is on money instead of safety. I wrote about that recently when Red Bull was sued for $85M — where I noted that it was a very poor move to put a number in the complaint, not only because it isn’t allowed but because it shifted the focus away from product safety.