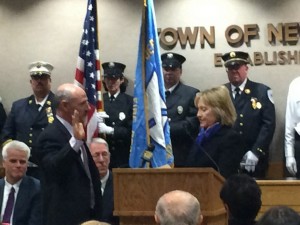 Several years back, the good folks at Above the Law had some fun with advertisements being run by a friend of mine, Rob Greenstein. His firm Greenstein & Milbauer was gently mocked by writer Kashmir Hill for having Spanish speaking squirrels to appeal to their Spanish speaking target audience.

But if that was the only thing written about Greenstein, it would leave a poor impression of him. He’s also spent a great deal of time fighting for civil justice issues before our Legislature as part of the Board of Directors and Executive Committee of the New York State Trial Lawyers Association — time that isn’t billed to any client and doesn’t come back in the form of a fee in any other way.

And for those that think trial lawyers are somehow anti-business, you might also want to know that he ran on a platform of the revitalization of New Castle’s downtown business districts and the need for a Chamber of Commerce, which he succeeded in starting up a year ago.

When Greenstein thought things weren’t going quite right in the Town of New Castle, where he lives, he ran for the office of Town Supervisor. And won on the tickets of both the Republican and Independence parties.

I think it’s fair to say that the renumeration he receives from that public service position will not be as great as that which he can earn as an attorney (though the headaches that come with it, might be).

Last night he was inaugurated, and a pretty famous resident of the Town of New Castle (hamlet of Chappaqua) stepped up to swear him in.  You can see the video of Secretary Hillary Clinton swearing him in in this local news broadcast.  If you listen carefully, you will hear Clinton respond that “fair is fair” when Greenstein mentions that, because she was honored by doing the swearing in here, that such an honor would be returned one day.

Also sworn in by Clinton were Lisa Katz as Deputy Supervisor, Adam Brodsky as Town Councilman and Noah Sorkin as Town Justice. More details at Inside Chappaqua.

I’ve spent quite a few posts in this blog needling personal injury lawyers that did things I thought were unacceptable. So it’s nice when I can turn the spotlight on someone who has done quite well indeed.

For those that want to see Clinton in a purely local event — she did write “It Takes A Village,” after all —  or see the Greenstein swearing in its entirety, the full video is here, which is easily fast-forwardable.